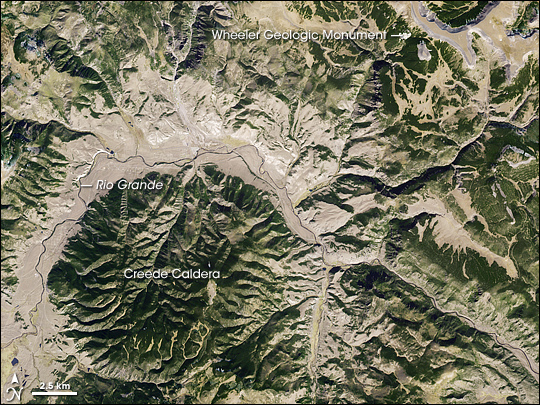 Situated in the San Juan Mountains of southwestern Colorado are two features that tell a story of ancient volcanic activity some 20 to 30 million years ago: Creede Caldera and Wheeler Geologic Monument. The Advanced Spaceborne Thermal Emission and Reflection Radiometer (ASTER) on NASA’s Terra satellite captured these features and their surroundings on November 3, 2007. This simulated-true-color image shows the rugged landscape of this mountainous region, including the forested hills and bare brown rocks.

Sharp ridges crisscross Creede Caldera, and a robust forest of conifer trees lend the feature a deep green hue. Creede Caldera is a well-preserved example of a resurgent dome. After a volcano erupts, a caldera forms—a crater with an elevation lower than its surroundings. When magma moves below this caldera and pushes it upward, the feature becomes a resurgent dome. Geologists were able to discern Creede’s structure through extensive mapping and drilling.

Northeast of Creede, lies Wheeler Geologic Monument (also known as the Wheeler Geologic Area), a small, jagged patch of white in this image. The site appears more dramatic from the ground. This site is an area of weathering volcanic tuff—consolidated volcanic ash. Besides weathering, Wheeler Geologic Area’s tuff also shows varying degrees of welding. When volcanic ash comes to rest, it is often still hot and pliable. Newer layers of ash land on older layers and compress air bubbles out of the material at the bottom of the heap, turning the lower ash layers into dense, dark rock with a glassy surface. The tuff at Wheeler Geologic Area results from the eruption that formed the San Luis caldera complex in southwestern Colorado.