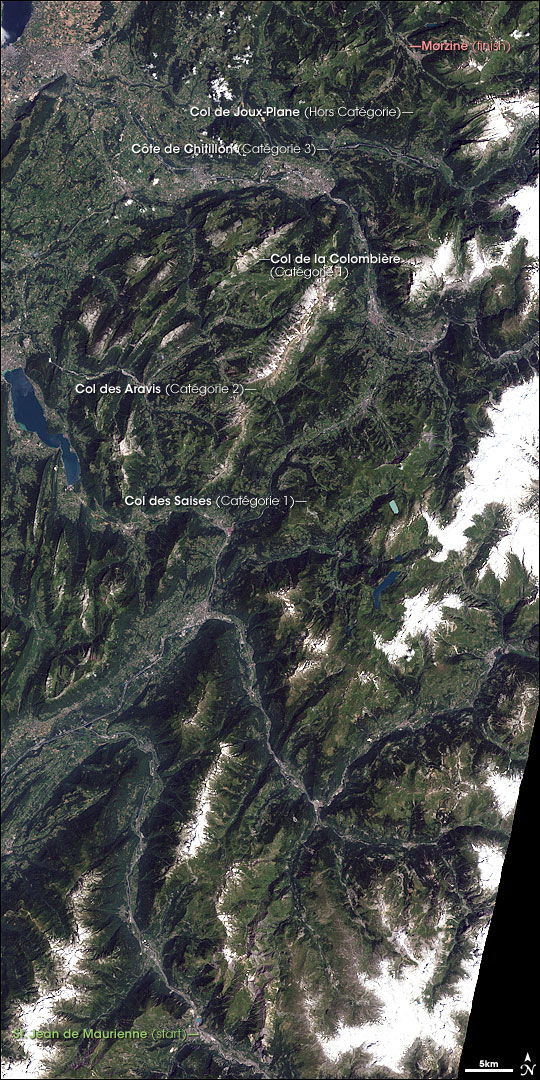 Each year in July, close to 200 professional cyclists converge on France for the most prestigious and grueling bike race in the world: the Tour de France. The three-week stage race traverses France with excursions into neighboring countries, scaling peaks in both the Pyrenees in the south and the Alps in the east. The race always finishes in front of hundreds of thousands of fans along the Champs-Élysées, a famous Paris street.

This image from the Enhanced Thematic Mapper Plus sensor on NASA’s Landsat satellite shows the terrain of the 17th stage of the race—the final day in the mountainous terrain of the Alps. Deep green forests line the lower slopes of mountains, while the summits of many of the peaks appear lighter green because they are beyond the elevation where trees can grow. Some of the summits are capped by glaciers. The rugged terrain is carved by gray ribbons of rivers and creeks.

Stage 17 starts in the town of Saint-Jean-de-Maurienne (lower left) and finishes in Morzine (upper right); the day’s ride is 200.5 kilometers (124.6 miles). The race organizers categorize the mountains on a scale of 1 to 4 (harder to easier), with a special “beyond category” (hors catégorie in French) for the absolute toughest mountain climbs. From Saint-Jean-de-Maurienne, the route takes riders north, roughly following the route of the Arc River, which flows northwest, where it eventually meets the Arly River. Beyond the Arly River, riders climb four steep passes more than 1,400 meters in altitude (1 meter is about 3.3 feet). The first, Col des Saises, is 1,650 meters tall. The last, Col de Joux-Plane, reaches 1,700 meters over 11.7 kilometers of road with an average gradient of 8.7 percent. From Col de Joux-Plane, riders race downhill into Morzine. Like other towns visible in the image, Morzine forms a gray spot against the green landscape of France’s Savoie and Haut-Savoie regions. Geneva, Switzerland, is the grey region on the shores of Lake Geneva in the upper left corner of the image.

NASA image by Robert Simmon, based on data provided by the Landsat science team and the UMD Global Land Cover Facility.

Race through the Pyrénées Mountains