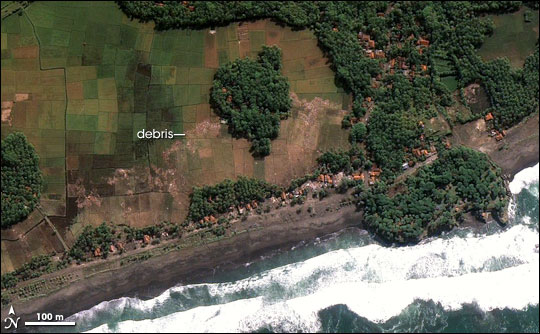 Off the island of Java, Indonesia, an earthquake rumbled under the ocean on July 17, 2006. The motion triggered a tsunami that struck the island about an hour later. According to news reports, the area most devastated by the roughly 3-meter (10-foot) wave was the area around Pangandaran, located about 40 kilometers (about 25 miles) west of the city of Cilacap.

This image from a commercial satellite called Ikonos shows the effect of the tsunami along part of Pangandaran Beach on July 19, 2006. The most dramatic evidence of the inland rush of water appears in the fields that surround an island of trees near image center. Between the beach and the “tree island,” the fields appear to have been either scoured or buried by sand and debris. Isolated bright specks within the washed-over area could be pieces of houses or other debris deposited by the rushing waters.

Several hundred people died in the area, which is a fishing community and resort area. Larger structures withstood the tsunami, but many smaller buildings and homes were washed away. Tens of thousands of people have been displaced by the devastation.

According to the U.S. Geological Survey, the earthquake occurred in a shallow part of the boundary between the Australia Plate and the Sunda Plate. The two tectonic plates meet offshore of the island of Java. The Australia plate dives beneath the Sunda Plate at a feature known as the Java Trench. The quake occurred about 50 kilometers north of there.