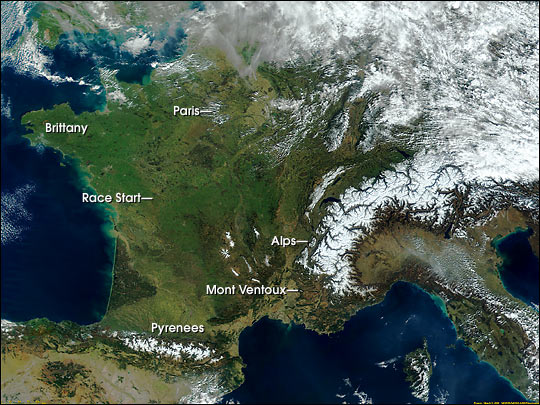 Every July, the world’s best cyclists race more than 3500 km around France, and sometimes the surrounding countries, in the Tour de France. This image from the Moderate resolution Imaging Spectroradiometer (MODIS) shows the varied terrain which challenges the riders. The race started in western France at Futuroscope, and headed toward Brittany. In these mostly flat #147;stages” (as each day’s race is called) sprinting specialists usually dash for the finish out of the main pack of riders. The race then moved to the Pyrenees mountains, in southern France along the border with Spain. Climbers and the overall favorites shine in the mountains, often gaining 10 minutes or more on their rivals. Only a few days after the Pyrenees climbs the race was again in the mountains. First Mont Ventoux, an extinct volcano in Provence, and then the massive Alps, with altitudes as high as 2,645 meters, challenged the racers. Finally the race headed toward Paris and a July 23rd finish in Paris.

To learn more about MODIS, visit the MODIS web.

Race through the Pyrénées Mountains