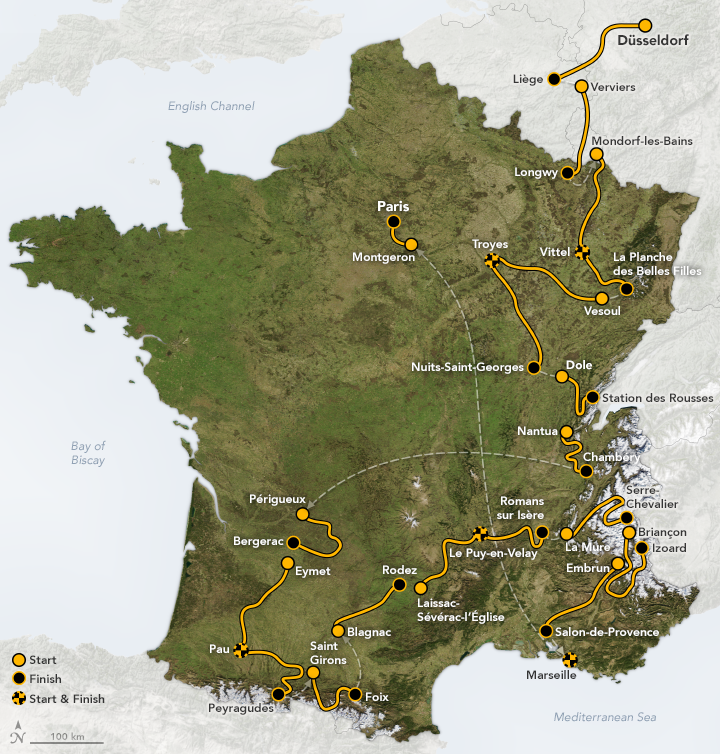 You don’t have to be a cycling enthusiast to appreciate the Tour de France. For decades, televised coverage of the annual summer race has treated viewers around the world to more than just bicycle racing; they also get a visual tour the country’s spectacular varied landscape. It is this variation—from flats to hills to mountains—that adds to the complexity of the sport, as different terrain types play to the unique capability of each competitor.

Almost every day for most of July, teams work to put a racer on the podium—as a top finisher in the stage of the day, or by taking the coveted yellow jersey (for the racer who holds the overall lead for all stages). By the tour’s ceremonial end in Paris, racers will have pedaled thousands of kilometers. The specific route, however, varies from year to year.

This image shows the route for the 104th Tour de France. It is overlaid on a “best pixel” mosaic of France, composed from small parts of cloud-free images acquired between January 1 and July 3, 2017, by the Moderate Resolution Imaging Spectroradiometer (MODIS) on NASA’s Terra satellite. Cities labeled with a yellow circle indicate the start of a day’s stage, and black indicates the city hosting the finish. Dashed lines indicate the two occasions when racers take flights to start the next stage.

The tour does not always begin in France; this year, racers started on July 1 with a time trial in Düsseldorf, Germany. They continued generally south across France to race a total of 3,940 kilometers during nine flat stages, five hilly stages, and five mountain stages. The mountain stages passed through the Vosges, the Jura, the Pyrénées, the Massif Central, and the Alps. The tour concludes on July 23 along the Champs-Élysées in northwestern Paris.