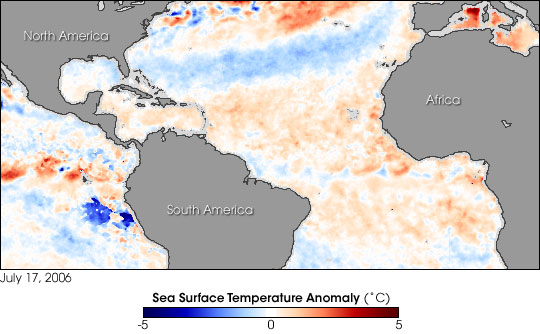 One explanation for the cool swath is a smaller-than-average southward extent of the Bermuda High. The Bermuda High is a semi-permanent area of high atmospheric pressure that shifts position in the Atlantic between Bermuda and the Azores Islands, off the coast of Portugal. According to indicators tracked by the National Oceanic and Atmospheric Administration (NOAA), the Bermuda High did not extend as far south as it normally does, and it has been weaker than normal since mid-June.

Forecasters monitor the position and strength of the Bermuda High because it influences hurricane formation and tracks. A high pressure zone over the ocean surface calms winds, which allows sea surface temperatures to warm. Air is generally sinking toward the surface in high-pressure areas, and sinking air tends to suppress cloud formation, which can also allow sea surface temperatures to rise. The calm winds in the area also reduce wind shear on developing storms. Finally, and perhaps most importantly, tropical storms that form tend to travel around the edge of the Bermuda High in a clockwise circle. When the Bermuda High shifts south and west, as it did in 2005, the path of storms takes them right into the Gulf of Mexico.

Forecasters must track the Bermuda High all season long because its location and strength can shift very rapidly from a configuration that would decrease the likelihood of land-falling hurricanes to one that would increase the likelihood. The current predictions from the National Hurricane Center are for a very active 2006 Atlantic hurricane season.

The July 17, 2006, data in this image were collected by the Advanced Microwave Scanning Radiometer for EOS (AMSR-E) sensor on NASA’s Aqua satellite. Those data are compared to a 12-year average calculated from measurements made by Advanced Very High Resolution Radiometer (AVHRR) sensors on several NOAA satellites between 1985 and 1997.

NASA image by Jesse Allen, based on data from Remote Sensing Systems