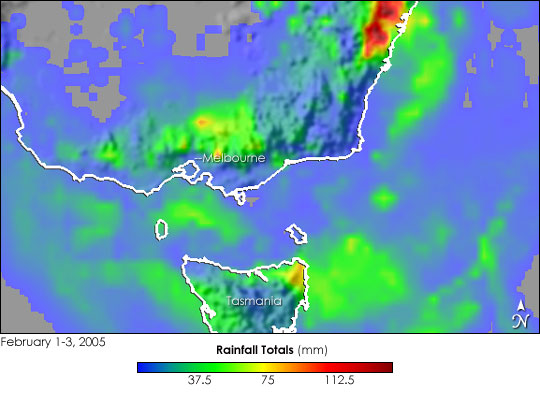 Melbourne, Australia set an all time record rainfall for a 24-hour period on the evening of the February 2 and morning of February 3, 2005. With a rainfall total of 120 mm (4.7 inches), more rain fell in that 24-hour period than any other day since records began in 1856. The previous record was 108 mm. An low-pressure center that intensified over Victoria was responsible for generating the storms, which spread gusty winds and heavy downpours across southeast Queensland, New South Wales, Victoria and Tasmania.

The TRMM-based, near-real time Multi-satellite Precipitation Analysis (MPA) at the NASA Goddard Space Flight Center monitors rainfall over the global Tropics. MPA rainfall totals for the February 1-3, 2005 are shown for southeastern Australia. Between roughly 40 and 75 millimeters of rain (green and yellow areas) are shown over the coastal range just north of Melbourne with locally heavier amounts of up to 4 inches (isolated red areas). The darker red areas along the east coast of New South Wales indicate areas over 100 millimeters of rainfall, and more than 75 millimeters inches of rain is shown by the orange area over the northeast tip of Tasmania.