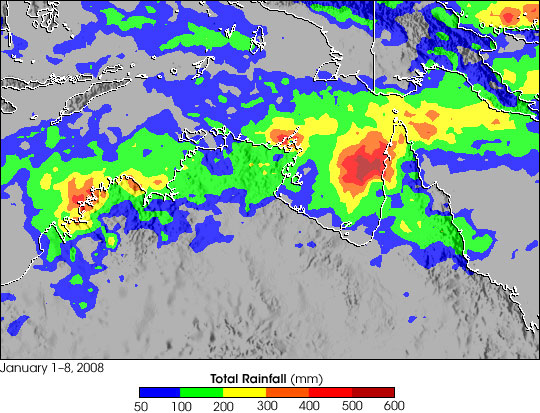 A variety of weather phenomena combined to deliver heavy rains to parts of Australia in the first week of January 2008, bringing a mixture of drought relief as well as some severe flooding. A substantial amount of rain along the northern coastline was due to Cyclone Helen, which formed in the southeastern Timor Sea area (image left) off the western coast of the Northern Territory.

This image shows rainfall totals across northern Australia between January 1-8, 2008, based on data from near-real-time, Multi- satellite Precipitation Analysis (MPA) at NASA Goddard Space Flight Center. The MPA is based in part on data from the Tropical Rainfall Measuring Mission (TRMM) satellite. The highest rainfall totals for the period (shown in dark red) are over 500 millimeters (~20 inches) in the eastern Gulf of Carpentaria (right of center). Over land, a broad area of 100 millimeters (~4 inches) extends from the northern coastline of Western Australia across the Northern Territory and into the York Peninsula in the east (green areas).

Even before Cyclone Helen, the northern coastline of Australia was already experiencing wet weather due to the interaction of monsoon rains with the Madden-Julian Oscillation (MJO). The MJO is a periodic atmospheric disturbance during which a large area of thunderstorms bubbles up in the Indian Ocean and slowly drifts eastward into the Pacific over the course of 30–60 days. The most recent MJO event was moving into the western Pacific Ocean in early January.

Tropical Cyclone Helen combined with the seasonal monsoon and the other weather patterns in the Pacific Ocean to produce heavy rains in Northern Australia.