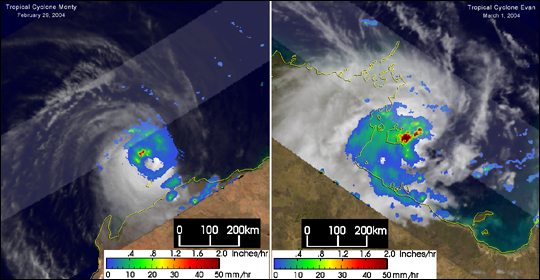 Two tropical cyclones made landfall in Australia just hours apart. Cyclone Monty came ashore along the northwest coast of Western Australia on the evening of March 1, 2004, (local standard time) while Cyclone Evan made landfall a few hours later in the early morning hours of March 2nd along the east coast of the Northern Territory. Monty formed into a tropical depression on February 26 from an area of low pressure that moved off of the coast of Western Australia into the Indian Ocean. The depression strengthened into a tropical storm early on February 27 and continued heading westward parallel to the coastline. It also continued to intensify. By 10 pm, Western Australia time (12:00 UTC) on the 29th, Monty had become a powerful cyclone with sustained winds estimated at 125 miles per hour (200 kilometers per hour). It was rated as a Category 4 Cyclone by the Bureau of Meteorology’s Tropical Cyclone Warning Center in Perth. An advancing cold front coming up from the southwest then steered Monty back towards the coastline, towards the southeast, where it then came ashore as a strong Category 3 storm near the town of Mardie.

Meanwhile, Cyclone Evan formed in the Gulf of Carpentaria becoming a depression on February 29. Evan also moved westward but did not become nearly as strong, achieving Category 1 status at 7 pm Australia North time (9:30 UTC) on March 1 just before crossing the island of Groote Eylandt. Evan hit the mainland on the east coast of the Northern Territory early the next morning while still a Category 1 storm according to the Tropical Cyclone Cyclone Warning Center in Darwin.

The Tropical Rainfall Measuring Mission (TRMM) satellite captured several unique images of these two cyclones. The image on the left shows Cyclone Monty off of the coast of Western Australia, north of Barrow Island. The image was taken at 11:31 pm Western Australia time (15:31 UTC) on February 29, 2004. At the time, Monty was a powerful Category 4 cyclone. The image shows the horizontal distribution of rain rates as seen from overhead by the TRMM satellite. Rain rates in the center swath are from the TRMM Precipitation Radar (PR), the first precipitation radar in space, while rain rates in the outer swath are from the TRMM Microwave Imager (TMI). The rain rates are overlaid on infrared (IR) data from the TRMM Visible Infrared Scanner (VIRS). Monty’ center falls within the TMI swath in this image, and the TMI does not have as fine a resolution as the Precipitation Radar. However, the TMI does show some heavy rainfall (red area) on the northwest side of the eye. Tropical cyclones rely on the heat that is released when water vapor condenses into cloud droplets to drive their circulation. These smaller droplets eventually form into larger raindrops that are easier to observe.

The next image of Monty (click on link marked Cyclone Monty, March 1), taken at 10:35 pm, Western Australia Time (14:35 UTC) on March 1, captures the storm just as it was hitting the coast. The image also shows rainrates overlaid on IR data as before, only now the PR passes directly over the center of the storm. TRMM shows that Monty still has a tight, well-organized circulation with a closed eye still visible and good banding surrounding the center. These bands are evident in the green areas associated with moderate rainrates. TRMM reveals that the bulk of the heavier rainfall (green areas) is on the left hand side of the storm as it is making landfall.

TRMM also captured a remarkable image (right) of Cyclone Evan just as it was entering Dalumbu Bay before crossing Groote Eylandt. This image was taken at 2:20 pm, Northern Australia/Darwin Time (04:50 UTC) on March 1. An area of intense rainfall (darker reds) appear near Evan’s center, but the tight banding seen in Monty is not apparent. Even though this region of intense rainfall could fuel the storm, Evan is too close to land for it to have a chance to intensify. As it crossed Groote Eylandt on March 2, the storm dumped a record 316 millimeters (12 inches) of rain on the island. The island’s previous 24-hour rainfall record was 158 millimeters (6 inches).

The TRMM-based, near-real time Multi-satellite Precipitation Analysis (MPA) at the NASA Goddard Space Flight Center monitors rainfall over the global tropics. The linked titled "Rainfall Totals" shows MPA rainfall totals for northern Australia in association with these two cyclones from February 23 to March 1, 2004. A swath of heavy rainfall (red areas) on the order of 8 to 12 inches is observed mainly offshore in association with Monty though some heavy and moderate (green areas) totals are evident over the coast. The rain associated with Evan, however, is embedded within a broad area of moderate (green areas) rainfall with locally heavier amounts (red areas) covering the Gulf of Carpentaria, the Northern Territory, and northern Queensland.

Two tropical cyclones made landfall in Australia just hours apart. Cyclone Monty came ashore along the northwest coast of Western Australia on the evening of 1 March 2004 (LST) while Cyclone Evan made landfall a few hours later in the early morning hours of March 2nd (LST) along the east coast of the Northern Territory.