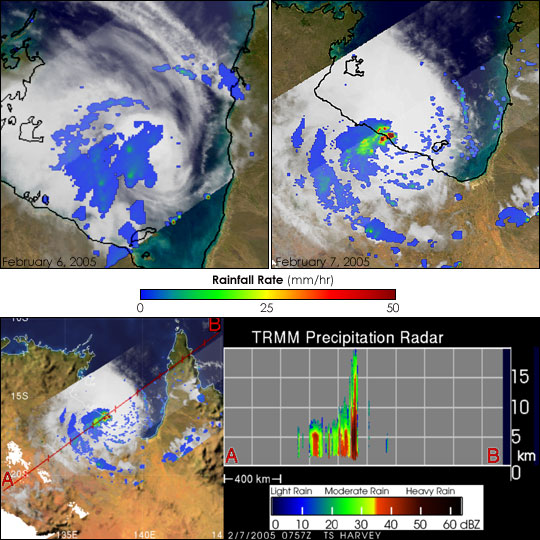 Cyclone Harvey hit the northern coast Australia on Monday, February 7, 2005, near the border between the Northern Territory and Queensland along the Gulf of Carpentaria with wind gusts of up to 220 kph (132 mph). The storm was rated as a Category 3 Cyclone at landfall by the Bureau of Meteorology's Tropical Cyclone Warning Center.

In November of 1997, the Tropical Rainfall Measuring Mission or TRMM satellite was launched to measure rainfall over the global Tropics. Armed with both passive and active sensors including the first and only precipitation radar in space, TRMM as has proven itself to be a valuable tool for examining tropical cyclones. TRMM was able to capture these unique images of Cyclone Harvey as it traversed the Gulf of Carpentaria and struck the coast of Australia.

The first image, top left, was taken at 08:52 UTC (6:22 pm Australian CST) on February 6, 2005, just as Harvey was becoming better organized in the central Gulf of Carpentaria. The image shows the horizontal distribution of rain rates (top down view) by the TRMM satellite. Rain rates in the center swath are from the TRMM Precipitation Radar (PR), while rain rates in the outer swath are from the TRMM Microwave Imager (TMI). The rain rates are overlaid on infrared (IR) data from the TRMM Visible Infrared Scanner (VIRS). The center of Harvey falls within the TMI swath in this image. Only light (blue areas) to occasional moderate (green areas) rain intensity is present, and most of the rain is located west of the center of Harvey. Little or no banding is visible in the rainfield indicating that the system is still in the early stages of development. At the time of this image, Harvey was rated as a Category 1 Cyclone by the Bureau of Meteorology’s Tropical Cyclone Warning Center indicating peak wind gusts of less than 125 kph (78 mph)--equivalent to a tropical storm.

The next image, top left, was taken at 07:57 UTC (5:27 pm Australian CST) on February 7, just as Harvey was hitting the coast. While the rain field still appears to be skewed to the west of the storm, the center is now surrounded by several areas of very intense rainfall (dark red areas) on the order of 2 inches per hour. Tropical cyclones rely on the heat that is released when water vapor condenses into cloud droplets, known as latent heating, to drive their circulation. These smaller cloud droplets eventually form into larger raindrops that are easier to observe. This heating is most effective at powering the storm when it is released near the center of circulation.

The final image is a vertical cross section looking east through the center of Harvey taken by the PR. It shows that the area of intense rain in the previous image is associated with what scientists call a “chimney cloud,” a deep, convective tower that extends high into the atmosphere well above the freezing level. Chimney clouds have been associated with the intensification of tropical cyclones. This particular chimney cloud extends up to an altitude of 20 km. It can be detected by the PR as precipitation-sized particles are lofted up high by updrafts within the cloud. So far Harvey has resulted in only minor flooding in eastern parts of the Northern Territory.