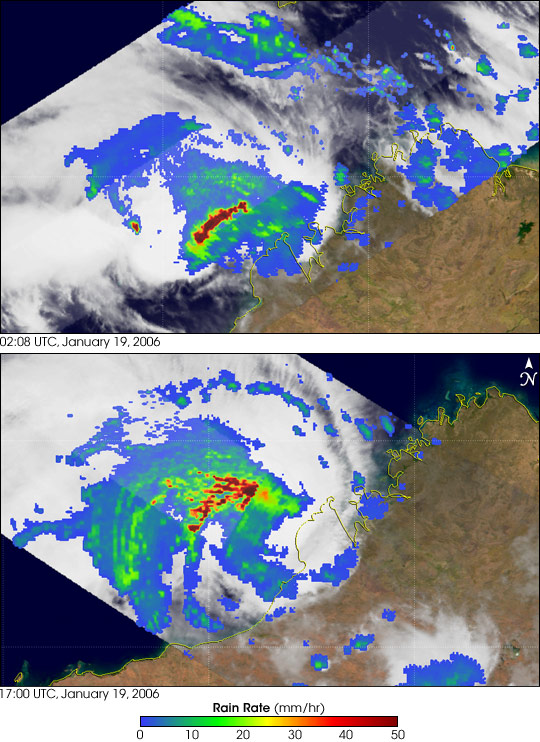 This pair of images shows the birth of Cyclone Daryl off the northwest coast of Western Australia on January 19, 2006. In the fifteen hours that elapsed between the time the Tropical Rainfall Measuring Mission (TRMM) satellite captured the top image at 10:08 a.m. Australian Western Standard Time and when it captured the bottom image at 1:00 a.m., Daryl went from a weak, newly named storm to a mature storm roughly equivalent to a Category 1 hurricane on the Saffir-Simpson scale. The storm’s center remained just offshore as it moved southwest along the coast, sparing coastal communities a direct hit.

Both images show rain rates in the storm. In the top image, TRMM reveals that despite having a sizeable band of intense rain (dark red segment) centered in a broad area of light (blue areas) to occasionally moderate (green areas) rain, Daryl showed very little evidence of circulation. This lack of circulation indicated that Daryl was in the early stages of development. At the time of this image, Daryl was rated as a Category 1 cyclone by the Australian Bureau of Meteorology’s Tropical Cyclone Warning Center, indicating peak wind gusts of less than 125 kilometers per hour (78 miles per hour)—equivalent to a tropical storm.

The lower image was taken just 15 hours later at 17:00 UTC (1:00 a.m. Australian WST on January 20) and shows a very different-looking storm. Although Daryl did not have a well-defined closed eye, the heavy rain had separated into arcing bands (green and darker red arcs), indicating that Daryl had a more mature circulation than it did earlier. Daryl became a Category 3 cyclone the following day.

Catching Tropical Cyclone Daryl in the act of building may provide new and critical data for understanding the complexities of storm intensification. Becuase storms tend to form and intensify well away from land, scientists are still trying to understand how cyclones intensify. Armed with both passive and active sensors, including the first and only precipitation radar in space, TRMM has proven itself to be a valuable tool for examining tropical cyclones. These images show rain rates as measured by a number of different sensors on the TRMM satellite. Rain rates in the center swath are from the TRMM Precipitation Radar, while rain rates in the outer swath are from the TRMM Microwave Imager. The rain rates are overlaid on infrared data from the TRMM Visible Infrared Scanner. Launched in November 1997 to measure rainfall over the global tropics, TRMM is a joint mission between NASA and the Japanese space agency, JAXA.