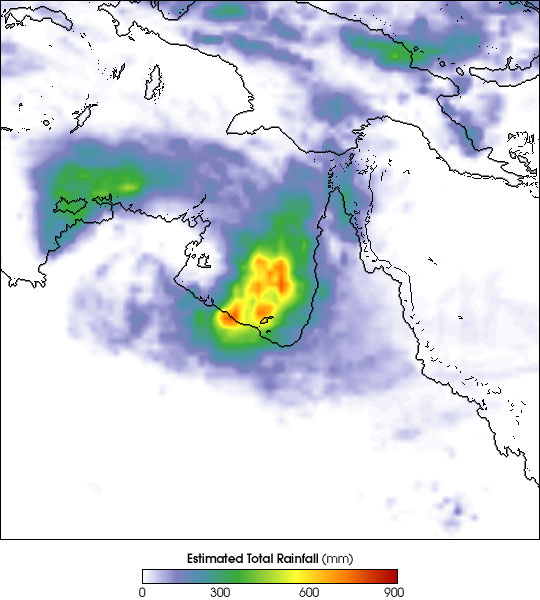 After enduring months of drought, northern Australia is seeing a dramatic end to the annual dry season. Indigenous people of the region refer to the November-May wet cyclone season as Warlungamarra, and the months of January and February are called Wunthurru, for "early storm period."

This "heavy wet" season is living up to its reputation in northern Australia along the Gulf of Carpentaria. Over the past weekend, a storm inundated parts of Queensland and Northern Territory with as much as 400 millimeters (15.84 inches) of rain in a single day—more rain in a single day than Los Angeles, Calif., receives in a year.

This image shows accumulated rainfall for parts of northern Australia around the Gulf of Carpentaria (center) from January 10–13, 2003, measured by the Tropical Rainfall Measuring Mission (TRMM) satellite. In the typical monsoon pattern, coastal areas received the most rainfall, which falls off toward the continental interior. The heaviest rain TRMM measured for the period was around 800 millimeters (2.64 feet), which fell right along the Northern Territory-Queensland boundary. The larger image shows global TRMM measurements for the same time period. Because TRMM’s objective is to observe tropical rainfall, its orbit takes it on a path roughly circling the equator, viewing the area about 35 degrees north and south of the equator.

According to reports from the Australian Bureau of Meteorology, the low pressure system that moved inland from the Gulf and brought the heavy rain had spun back out to its original position in the Gulf by January 14, and showed no sings of leaving for several days. Flood warnings remain in effect for portions of northeastern Northern Territory and northwestern Queensland.