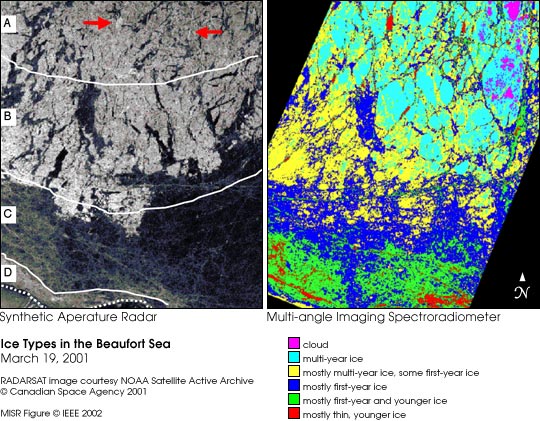 Determining the amount and type of sea ice in the polar oceans is crucial to improving our knowledge and understanding of polar weather and long term climate fluctuations. These views from two satellite remote sensing instruments; the synthetic aperture radar (SAR) on board the RADARSAT satellite and the Multi-angle Imaging SpectroRadiometer (MISR), illustrate different methods that may be used to assess sea ice type. Sea ice in the Beaufort Sea off the north coast of Alaska was classified and mapped in these concurrent images acquired March 19, 2001 and mapped to the same geographic area.

To identify sea ice types, the National Oceanic and Atmospheric Administration (NOAA) National Ice Center constructs ice charts using several data sources including RADARSAT SAR images such as the one shown at left. SAR classifies sea ice types primarily by how the surface and subsurface roughness influence radar backscatter. In the SAR image, white lines delineate different sea ice zones as identified by the National Ice Center. Regions of mostly multiyear ice (A) are separated from regions with large amounts of first year and younger ice (B-D), and the dashed white line at bottom marks the coastline. In general, sea ice types that exhibit increased radar backscatter appear bright in SAR and are identified as rougher, older ice types. Younger, smoother ice types appear dark to SAR. Near the top of the SAR image, however, red arrows point to bright areas in which large, crystalline "frost flowers" have formed on young, thin ice, causing this young ice type to exhibit an increased radar backscatter. Frost flowers are strongly backscattering at radar wavelengths (cm) due to both surface roughness and the high salinity of frost flowers, which causes them to be highly reflective to radar energy.

Surface roughness is also registered by MISR, although the roughness observed is at a different spatial scale. Older, rougher ice areas are predominantly backward scattering to the MISR cameras, whereas younger, smoother ice types are predominantly forward scattering. The MISR map at right was generated using a statistical classification routine (called ISODATA) and analyzed using ice charts from the National Ice Center. Five classes of sea ice were found based upon the classification of MISR angular data. These are described, based on interpretation of the SAR image, by the image key. Very smooth ice areas that are predominantly forward scattering are colored red. Frost flowers are largely smooth to the MISR visible band sensor and are mapped as forward scattering. Areas mapped as blue are predominantly backward scattering, and the other three classes have statistically distinct angular signatures and fall within the middle of the forward/backward scattering continuum. Some areas that may be first year or younger ice between the multi year ice floes are not discernible to SAR, illustrating how MISR potentially can make a unique contribution to sea ice mapping.

The Multi-angle Imaging SpectroRadiometer observes the daylit Earth continuously and every 9 days views the entire globe between 82 degrees north and 82 degrees south latitude. The MISR Browse Image Viewer provides access to low-resolution true-color versions of these images. This data product was generated from a portion of the imagery acquired during Terra orbit 6663. The MISR image has been cropped to include an area that is 200 kilometers wide, and utilizes data from blocks 30 to 33 within World Reference System-2 path 71.