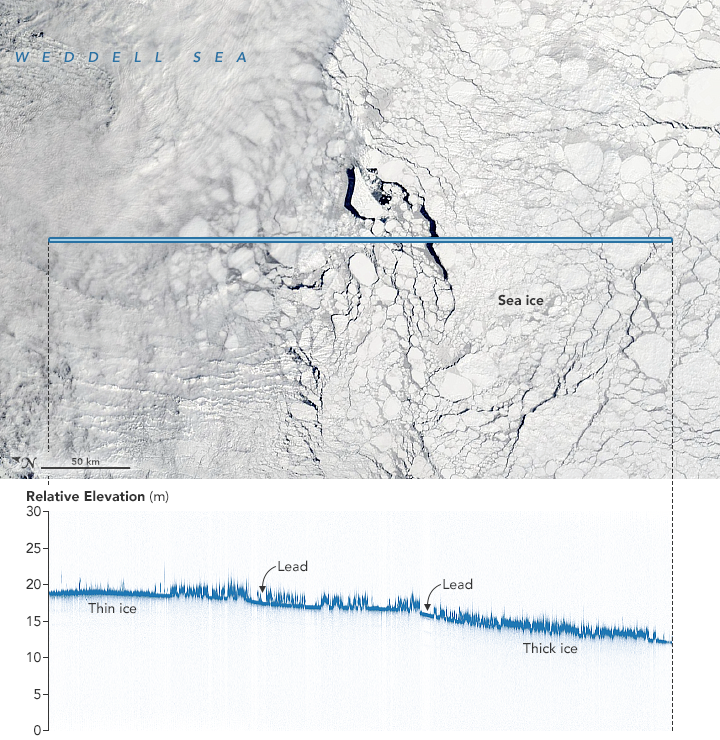 NASA’s Ice, Cloud and land Elevation Satellite-2 (ICESat-2) was launched in September 2018 and became the highest-resolution laser altimeter ever operated from space. The satellite is now measuring the height of Earth’s surfaces in remarkable detail. In this series, NASA Earth Observatory is sharing three early views that highlight the breadth of what ICESat-2 can “see,” from Antarctica’s icy terrain and sea ice, to the forested hillside and shallow-water bathymetry in Mexico.

The frozen lid on the Southern Ocean around Antarctica appears to the eye as a vast, flat icescape. But even small variations in height across this sea ice are important for things like deriving sea ice thickness and how it’s changing. They can also help scientists discern when and where seasonal sea ice starts growing.

“We know a lot less about the sea ice in the Antarctic than the Arctic,” said Ron Kwok, a sea ice scientist at NASA’s Jet Propulsion Laboratory. ICESat-2, which can detect elevation differences down to a few centimeters, will change that. “We can see so much more detail than we have seen before.”

The elevation measurement above, acquired with ICESat-2 on October 17, 2018, shows the height of the sea ice along an orbital path over the Weddell Sea. For reference, the orbital path is laid over a natural-color image acquired on the same day by the Moderate Resolution Imaging Spectroradiometer (MODIS) on NASA’s Terra satellite. The Weddell Sea is part of the Southern Ocean and is bounded to the west by the Antarctic Peninsula, to the east by Cape Norvegia, and to the south by the Filchner and Ronne ice shelves. The area is difficult to reach in person, especially in winter. But treacherous weather, darkness, and cold are not an issue for ICESat-2.

The satellite’s Advanced Topographic Laser Altimeter System (ATLAS) measures elevation by sending pulses of light to Earth’s surface. It then measures, to within a billionth of a second, how long it takes individual photons to return to the satellite. Each dot on the visualization above represents a photon detected by ATLAS. Some of the dots in this “photon cloud” are photons from the Sun that were reflected by the snow and ice, but the photons from the altimeter are clustered around the sea ice surface.

Along this path you can see the sea ice transition from thick to thin as you move toward the north (left) and closer to the edge of the ice cover. Older ice is thicker; it is also rougher because it has been deformed over time. Younger ice is thinner and nearly flat.

The ability to identify newly formed thin ice will help researchers track the seasonal changes in remote polar regions. Scientists will be able identify with better precision the location of the ice edge, where the open ocean transitions to sea ice. That’s of particular interest during the fall when seasonal sea ice starts to grow and in the spring when the ice cover retreats.

The new data will also aid efforts to make precise estimates of the ice thickness. Those estimates are made by comparing the height of the ice surface with the height of open water in the cracks between the ice floes, called leads. This information tells you the freeboard; that is, the height that the sea ice stands above the water level. Freeboard, in turn, can be used to estimate the total thickness of the sea ice above and below the waterline.

With the high precision of ICESat-2 lasers, plus six beams taking data simultaneously, researchers will have an unprecedented understanding of the thickness of sea ice, which will be used to help improve climate modeling and forecasts.