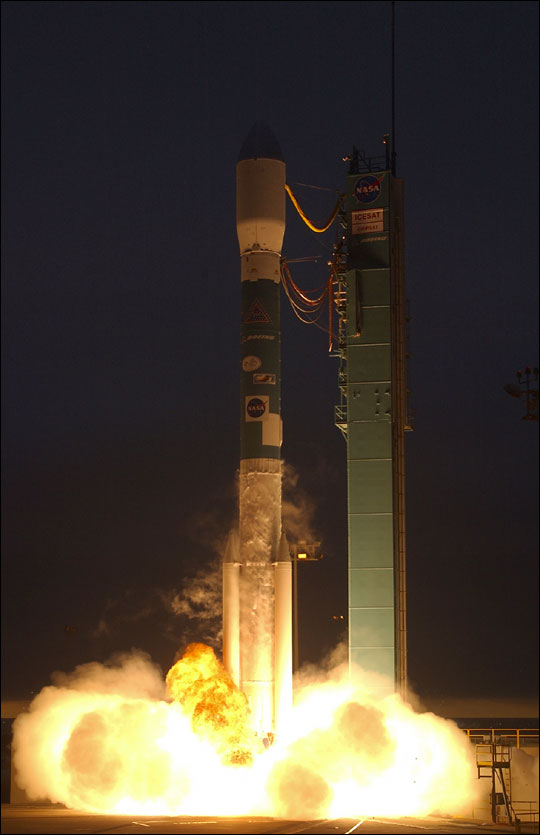 NASA’s Ice, Cloud and Land Elevation satellite (ICESat) lifted off from Vandenberg Air Force Base, Calif., at 4:45 p.m. PST aboard Boeing’s Delta II rocket. Separation of the ICESat spacecraft occurred 64 minutes after launch at 5:49 p.m. PST. Initial contact with ICESat was made 75 minutes after launch at 6 p.m. PST as the spacecraft passed over the Svalbard Ground Station in Norway.

“The Delta vehicle gave us a great ride! The ICESat spacecraft was right where we expected and is performing great. The whole team is thrilled to be having such a wonderful start to our mission” said Jim Watzin, the ICESat Project Manager at NASA’s Goddard Space Flight Center in Greenbelt, Md.

Over the next few days the ICESat spacecraft will gradually be despun and placed into a safe stable attitude. Within two weeks the onboard propulsion system will gradually tune the orbit. Once in its final orbital position, ICESat will be approximately 373 miles (600 kilometers) above the Earth.

ICESat is the latest in a series of Earth Observing System spacecraft, following the Terra satellite launched in December 1999, and the Aqua satellite launched earlier in May of this year. The primary role of ICESat is to quantify ice sheet growth or retreat and to thereby answer questions concerning many related aspects of the Earth’s climate system, including global climate change and changes in sea level.