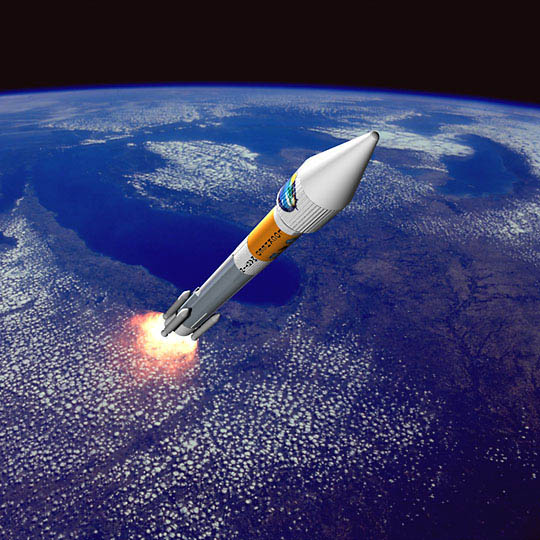 NASA will launch and deploy the "flagship" to the Earth Observing System series of satellites, part of a precedent setting program designed to provide daily information on the health of the planet. The Terra spacecraft, formerly known as "EOS AM-1," is scheduled for launch Dec. 16, 1999.

Terra begins a new generation of Earth science - one that studies the Earth's land, oceans, air, ice and life as a total global system. Terra will carry a complement of five synergistic state-of-the-art instruments. Researchers now recognize that the Earth - land, oceans, life, and atmosphere - operates as a system - one part impacting the other. EOS will help us to understand how the complex coupled Earth system of air, land, water and life is linked. A series of 10 spacecraft, known as the first EOS series, are scheduled for launch into the next decade.

A polar-orbiting spacecraft, Terra is scheduled for launch aboard an Atlas-Centaur IIAS expendable launch vehicle from Vandenberg Air Force Base, Calif. The 25-minute launch window opens at 1:33 p.m. EST (10:33 a.m. PST). Separation of the spacecraft from its launch vehicle will occur about 14 minutes after launch.

The flagship of NASA’s modern Earth-observing satellite fleet launched from Vandenberg Air Force Base on December 18, 1999.