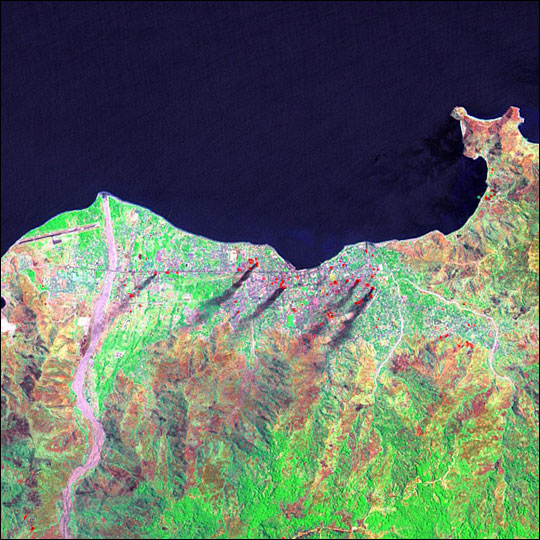 Violence has marked East Timor’s emergence as an independent nation. This false-color Enhanced Thematic Mapper Plus (ETM+) image from Landsat shows parts of the city of Dili, which became the capital of the independent nation of East Timor. The image was captured on September 8, 1999, only a few days after the announcement of the results of the referendum in which the residents of the island voted on whether to remain part of Indonesia or to become an independent nation. The overwhelming support for independence sparked violent protests among dissenters, who set scores of fires (red dots). Dark gray smoke streams southwest from burning buildings in the center of the image.

Rivers appear pinkish-purple in this false-color combination. To the west of Dili is the Comoro River. To the east are the Bemorl and Benmauc Rivers, which join before emptying into the mingling waters of the Sawu and Banda Seas. To the west of the Comoro River near the coast is a thin, straight, purplish line that marks the location of the Comoro air strip. At bottom right are the mountains of central East Timor, whose highest peak reaches more than 2,900 meters (9,570 ft).

This is a false-color composite image made using shortwave infrared, near infrared, and blue wavelengths(ETM+ plus bands 7,4, and 1).

Image provided by the Australian Landsat receiving station and the Landsat 7 Science Team.

In east-central Alaska, the Pingo Fire was scorching hundreds of thousands of acres north of the Yukon River in early July 2004.