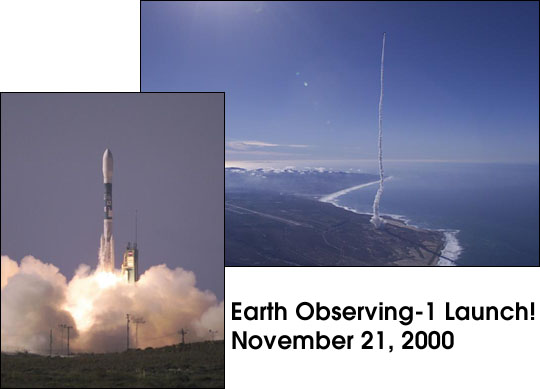 These photos [view expanded images of launch (left) or view from above (right)] show the launch of the Boeing Delta II rocket from Vandenberg Air Force Base, CA, at 10:24 a.m. on November 21 PST, carrying a payload of three satellites into orbit. The payload included NASA's Earth Observer-1 (EO-1), Argentina's SAC-C, and Sweden's Munin spacecraft. Sixty minutes after lift-off, EO-1 was successfully deployed in orbit; SAC-C was deployed about 30 minutes later, and Munin deployed shortly after that. All three satellites are performing well.

The launch of EO-1 marks the beginning of NASA's New Millennium Program (NMP), in which NASA is developing smaller, lighter spacecraft that meet or exceed the performance of current satellite technologies. The goal of NMP is to improve the on-orbit measurement capabilities of satellites while reducing the cost to build and launch them into space. Because its purpose is to demonstrate new technology on orbit, data from EO-1 will be made available only after the team completes its calibration and validation activities.

Over the next two weeks, EO-1 and SAC-C will gradually be moved into their final orbital trajectories--flying very nearly from pole to pole at an altitude of 705 kilometers. The objective is to fly them in formation with Landsat 7 and Terra, two of NASA's Earth Observing System (EOS) satellites already in orbit, so that their data may be cross compared for calibration and validation purposes. EO-1 will follow about 60 seconds behind Landsat 7, descending southward across the equator at about 10:16 a.m. local time.