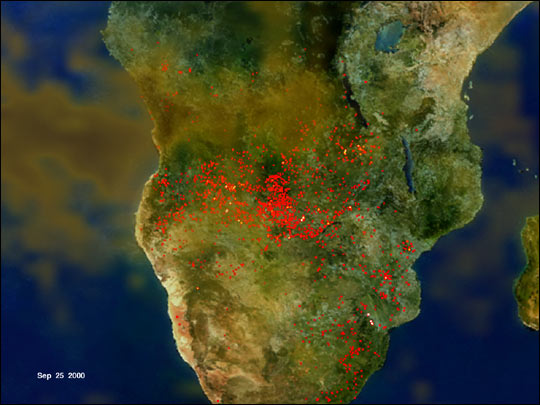 The fires that raged across southern Africa this August and September produced a thick "river of smoke" over the region. NASA-supported studies currently underway on the event will contribute to improved air pollution policies in the region and a better understanding of its impact on climate change.

This year the southern African fire season peaked in early September. The region is subject to some of the highest levels of biomass burning in the world. The heaviest burning was in western Zambia, southern Angola, northern Namibia, and northern Botswana. Some of the blazes had fire fronts 20 miles long that lasted for days.

In this animation, multiple fires are burning across the southern part of the African continent in September 2000. The fires, indicated in red, were observed by the Advanced Very High Resolution Radiometer (AVHRR) instrument on board the NOAA-14 satellite. The fires generated large amounts of heat-absorbing aerosols (the dark haze), which were observed with the Earth Probe Total Ozone Mapping Spectrometer (TOMS) instrument.

These observations were collected as part of a NASA-supported field campaign called SAFARI 2000 (Southern African Regional Science Initiative). The recent six-week "dry-season" portion of this experiment was planned to coincide with the annual fires. SAFARI 2000 planners tracked the changing location of fires with daily satellite maps provided by researchers at NASA’s Goddard Space Flight Center.

"Every year African biomass burning greatly exceeds the scale of the fires seen this year in the western United States," says Robert Swap of the University of Virginia, one of the campaign organizers. quot;But the southern African fire season we just observed may turn out to be an extreme one even by African standards. It was amazing how quickly this region went up in flames."

The thick haze layer from these fires was heavier than campaign participants had seen in previous field studies in the Amazon Basin and during the Kuwati oil fires. The haze aerosols sampled were more heat-absorbing than expected, which means the haze layer may have a significant warming influence on the region’s atmosphere.