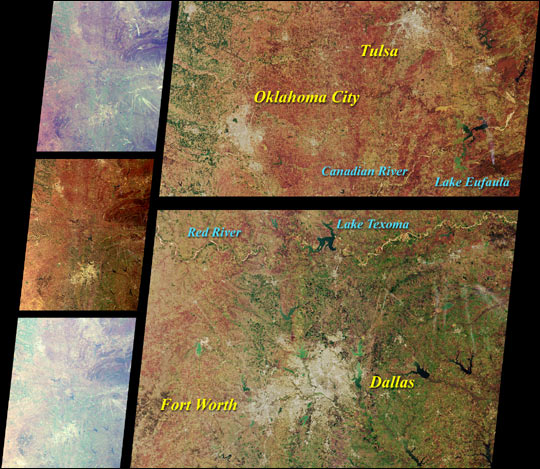 These Multi-angle Imaging Spectroradiometer (MISR) images of Oklahoma and north Texas were acquired on March 12, 2000. The three images on the left, from top to bottom, are from the 70-degree forward viewing camera, the vertical-viewing (nadir) camera, and the 70-degree aftward viewing camera. The higher brightness, bluer tinge, and reduced contrast of the oblique views result primarily from scattering of sunlight in the Earth's atmosphere, though some color and brightness variations are also due to differences in surface reflection at the different angles. The longer slant path through the atmosphere at the oblique angles also accentuates the appearance of thin, high-altitude cirrus clouds.

On the right, two areas from the nadir camera image are shown in more detail, along with notations highlighting major geographic features. The south bank of the Red River marks the boundary between Texas and Oklahoma. Traversing brush-covered and grassy plains, rolling hills, and prairies, the Red River and the Canadian River are important resources for farming, ranching, public drinking water, hydroelectric power, and recreation. Both originate in New Mexico and flow eastward, their waters eventually discharging into the Mississippi River.

A smoke plume to the north of the Ouachita Mountains and east of Lake Eufaula is visible in the detailed nadir imagery. The plume is also very obvious at the 70-degree forward view angle, to the right of center and about one-fourth of the way down from the top of the image.