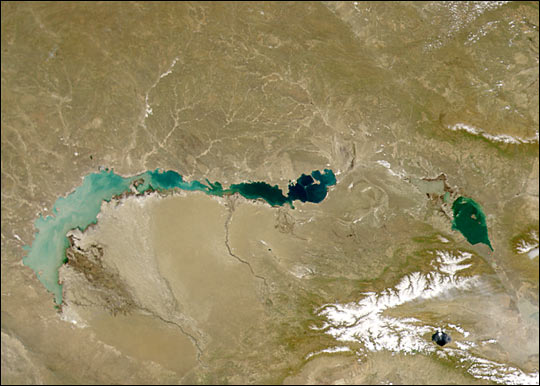 This image of crescent-shaped Lake Balkhash was taken by the Sea-viewing Wide Field-of-view Sensor (SeaWiFS) on April 27, 2000. Lake Balkhash is located in eastern Kazakhstan, north of the Tian-Shan mountains. The Ili River flows into the western end of the lake, filling it with bright sediment. This sediment highlights the difference between the freshwater western side of the lake and the saline eastern side. A sandbar prevents mixing between the lake’s two sections.

Other features in this image include Lake Sayram in the lower right (southeast) corner, which is surrounded by the Borohoro Shan mountain range. At center right, just north of the Borohoro Shan, are lakes Sasykkol (left) and Alakol (right). The Karatal River flows northward through an arid and sandy landscape into the center of Lake Balkhash.

The full-size image compares the region on April 27th image with one from the 18th. In that time sediments in lakes Balkhash and Sasykol increased noticeably, probably due to snowmelt—note the decrease in snowcover on the region’s mountains. Also, the ice on Lake Sayram melted.

These images were retrieved by the SeaWiFS high-resolution ground station in Mongolia, which recently began sending data to Goddard Space Flight Center.