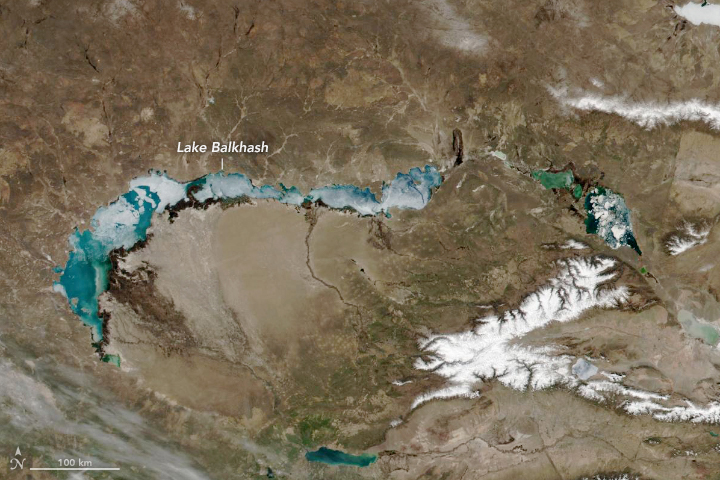 Don’t blink or you might miss some of Earth’s most spectacular transitions. As spring tightens its grip on the Northern Hemisphere, natural events like rainfed wildflower blooms, wind-stirred sediment swirls, and melting lake ice can fade as fast as they formed.

Lake Balkhash, spanning about 17,000 square kilometers (6,600 square miles) in southeastern Kazakhstan, is one of Asia’s largest lakes. Despite the lake’s large size, winters are harsh enough to keep the lake frozen over from November through March. By April 8, 2019, when the Visible Infrared Imaging Radiometer Suite (VIIRS) on Suomi NPP acquired this image, the spring thaw was underway. Images from just a week before show the lake almost entirely covered with ice.

How long will it take Lake Balkash to become entirely ice free? In the past, the full transition has happened in a matter of weeks; check out this image pair from April 11 and 18, 2003. Water and air temperatures at this time of year are climbing, and the region is commonly windy, which can help break up lake ice.

Notice that in areas where ice has already released its grip, the water appears in brilliant turquoise. That’s in part because the lake is extremely shallow—averaging 4.3 meters deep on the western side—which makes it easier for winds to stir up sediments from the bottom.

Most of the water feeding the western portion of the lake comes from the Ili River, which is fed by meltwater runofff originating in the Tien Shan Mountains. (Part of that mountain chain, the Borohoro Range, is pictured with caps of snow and ice.) Research has found that degrading glaciers and melting snow in the Tien Shan have led to increases in the water level of Lake Balkash in recent decades. However, the authors note that if glacier degradation and melt continue, water level increases could quickly shift to decreases. 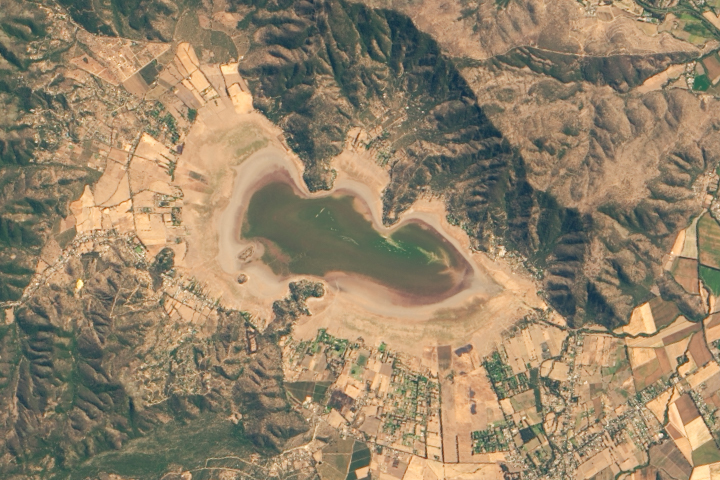