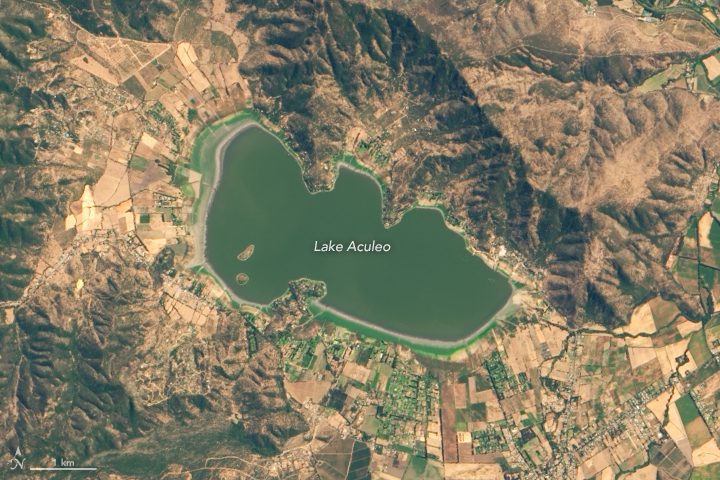 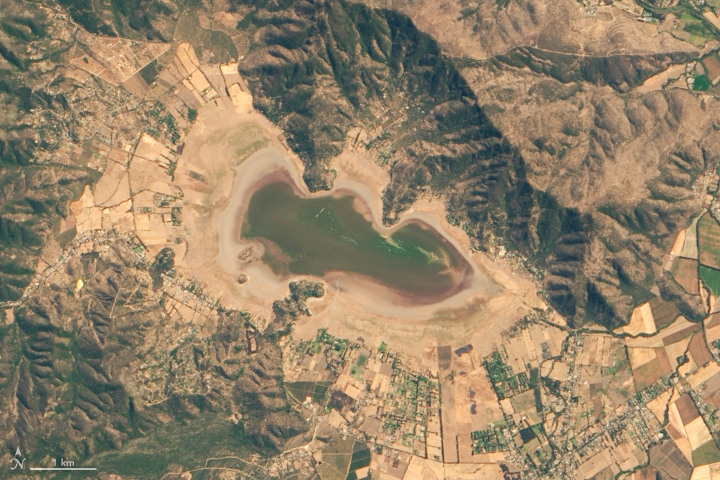 Laguna de Aculeo has long been a popular summer destination for residents of Santiago, Chile. Tucked into a valley less than two hour’s drive from the capital, the shallow lake has been a haven for boaters, swimmers, and water skiers for decades. Its water once spread across an area four times the size of New York’s Central Park and had a depth of 6 meters (20 feet). But by April 2019, all of the water was gone, replaced by a crust of dried mud and a blanket of green vegetation.

The Operational Land Imager (OLI) on Landsat 8 revealed the changes in this pair of natural-color images acquired on February 26, 2014, and March 12, 2019. In the 2019 image, the green within the lake is vegetation, not water. The false-color image below, made with a combination of infrared and visible light (bands 6-5-4), helps distinguish between vegetation (light green) and standing water (dark blue) because vegetation reflects more infrared light.

Landsat 8 acquires a new image of the lake every 16 days. Its images show the lake dried out completely for the first time on April 10, 2018. Water occasionally pooled in the lakebed in 2018, but it was dry for much of the summer. The OLI record shows the lake has been dry at the time of each observation in 2019. 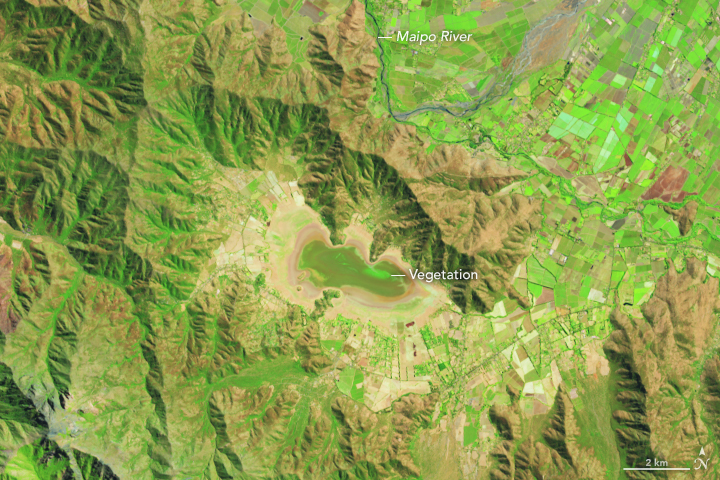 Scientists say a combination of factors put the lake in such a dire condition. One of the most important was a lack of rain. Since 2010, an intense and persistent drought has parched Santiago and the rest of central Chile, reducing rainfall by an average of 25 to 45 percent every year.

“Droughts are not uncommon here given our semi-arid, Mediterranean climate,” said Rene Garreaud, an Earth scientist at the Universidad de Chile, in Santiago. “But this decade-long dry spell is unprecedented in the 20th century and very rare in the past 1000 years, according to tree-ring studies that make it possible to reconstruct past climate patterns.”

Scientists who have studied the megadrought attribute about a quarter of its intensity and severity to global warming. They attribute the rest to natural cycles in atmospheric circulation, ocean temperatures, and rainfall patterns, such as those associated with the Pacific Decadal Oscillation.

Though scientists are currently working on a detailed water balance for the lake, Garreaud estimates that about half of the water losses since 2010 are the result of the drought. The rest of the losses relate to irrigation and increased water consumption. While runoff from the fields and orchards surrounding the lake has been a key source of water in the past, the flow has declined as irrigation systems have become more efficient. The replacement of center-pivot or traveling sprinklers with drip irrigation, for instance, dramatically reduces the amount of leftover water.

Meanwhile, the nearby community of Paine has been growing fast. Its population increased by 45 percent between 2002 and 2017, according to statistics from Chile’s National Statistics Institute. In the past decade, water consumption in the region increased 20 percent, noted Garreaud. You can see a time-series of Landsat imagery showing the growth of Paine here.

Persistent drought and intensive water use has proven too much for this lake in Chile.