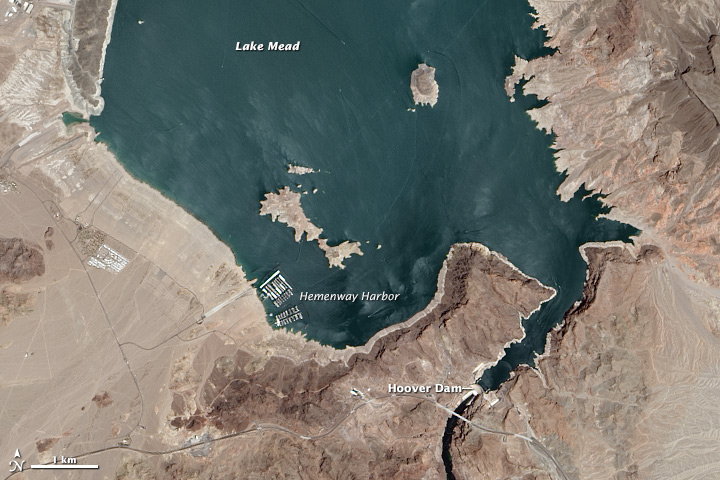 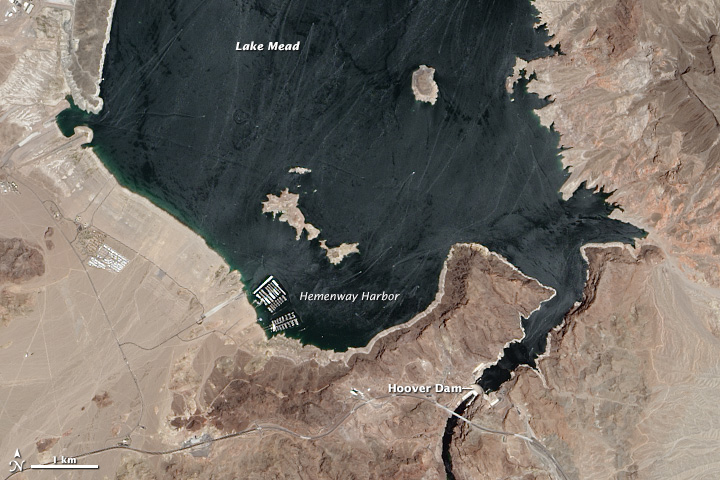 In May 1937, shortly after the Hoover Dam was completed and 27 months after Lake Mead started filling, the water level was 1078.70 feet (328.79 meters) above sea level. For 77 years since then, the water level behind the dam has not dropped below 1080 feet. But it just might do that soon.

As the largest reservoir in the United States, Lake Mead is fed mostly by the Colorado River and its tributaries. They are in turn fed by snowmelt from the Rocky Mountains. Lake Mead and the river supply water to farms, businesses, and residents in Nevada, southern California, Arizona, and northern Mexico, and inputs and outflows from the lake are tightly managed by agreements between the surrounding states and Mexico.

According to the U.S. National Park Service and the Bureau of Reclamation, the amount of water flowing out of and evaporating from Lake Mead in recent years has consistently exceeded the amount of water flowing in. To date, Lake Mead has been able to meet the growing demands downstream. The U.S. delivers “about 9 million acre-feet of water to homes, businesses, farms, Native American tribes and communities.” But the trends on Lake Mead something has to change soon in precipitation patterns or water use.

The images at the top of this page were acquired on July 21, 2014, and June 16, 2013, by the Operational Land Imager on the Landsat 8 satellite. Both images show the lake at its south end, near Hoover Dam. Differences in water color could be a difference in the amount of suspended sediment or a result of slightly different lighting. Shorelines retreated over the year, and islands in the middle of the lake continue to grow as water recedes. Turn on the image comparison tool to spot the differences. View our 2003 feature story to see how much has changed since 2000.

The southwestern United States and the Colorado River basin have been coping with varying levels of drought for most of the past fourteen years. The river collects most of its water from melting snow each spring and summer, but the winter supplies have been uneven and generally below average. As a result, the water stored in the two great reservoirs of the region—Lake Powell and Lake Mead—has been declining slowly but steadily.