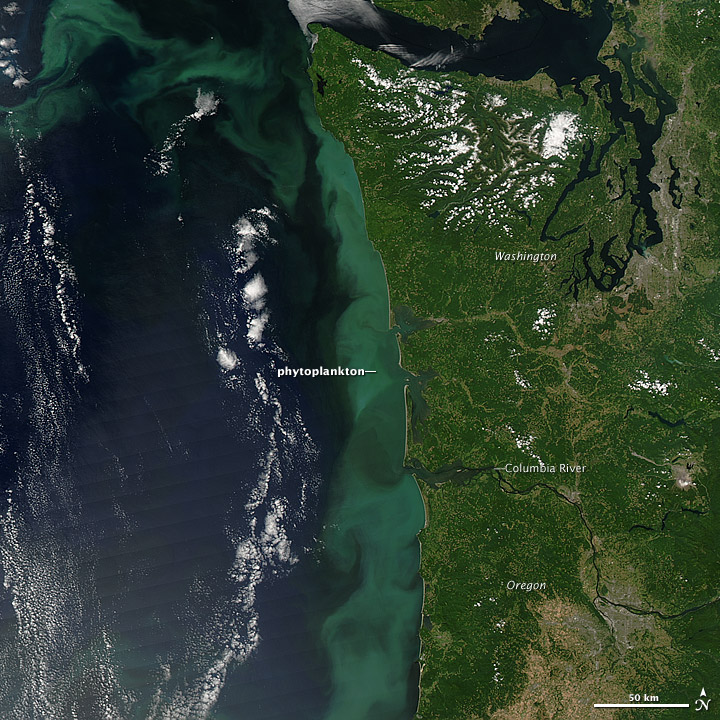 In the early afternoon on July 26, 2014, the Moderate Resolution Imaging Spectroradiometer (MODIS) on NASA’s Aqua satellite acquired this natural-color view of a massive bloom of phytoplankton off the coast of Oregon and Washington. The floating, plant-like organisms give the water a milky green color in satellite imagery.

Marine phytoplankton require just the right amount of sunlight, dissolved nutrients, and moderate water temperatures—not too hot, not too cold—to make their populations explode into blooms that cover hundreds of square kilometers of the sea. In the Pacific Northwest of North America in the summer, warming land temperatures create favorable winds that blow offshore and push surface waters away from the coast. This causes cooler, nutrient-rich waters to well up from the depths and provide the right conditions for blooms. The phytoplankton can become a rich food source for zooplankton, fish, and other marine species; however, some species can also deplete the water of oxygen and become toxic to marine life.

“Blooms of this type are common during the summer due to the coastal upwelling process,” said Bill Peterson of NOAA’s Northwest Fisheries Science Center, whose team samples the waters off Oregon every two weeks. “What is uncommon is the ability to see so much of the coast in a single image because fog and low-elevation clouds often obscure large-scale views.”

According to Peterson, water samples taken from ships on July 22, 2014, were dominated by diatoms—Dactyliosolen fragilissima, Lepotocylindricus sp, and three species of Thalassiosira—species that “occur commonly in the upwelling zone of the northern California Current.” Researchers counted one million to three million cells per liter of water.

Angelicque White, a marine biologist at Oregon State University, noted that satellites measure sea surface temperatures and fluorescence, a proxy for the amount of sunlight-harvesting chlorophyll in phytoplankton. These data allow researchers to detect upwelling events and blooms and study them over time. White’s group maintains a web site showing these data for the northwest coast.

Note how the abundance of water color is darker in the area just offshore from the Columbia River. It is likely that the river outflow has affected the patterns of upwelling and mixing, or it had changed the salinity, temperature, or other water properties nearby. As the river enters the ocean, it generates a freshwater plume that mixes with the surrounding seawater. The dark patch could be an area with less phytoplankton, but it could also be full of different species that do not show up as well in natural color imagery. 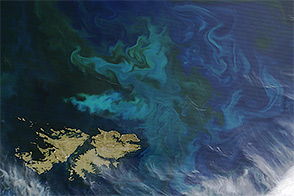 Phytoplankton Blooms off the Falkland Islands

The swirling greens and blues are densely concentrated, microscopic plants growing on the surface of the ocean.