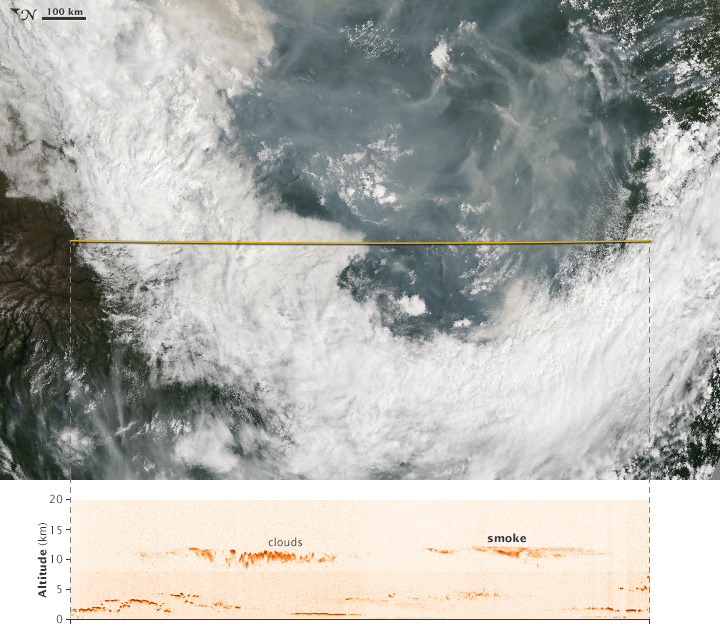 With average January temperatures of -40 degrees Celsius, Sakha is famous for being one of the coldest parts of Russia. But in July 2014, it wasn’t the cold that worried the nearly million people who live there. It was fire.

On July 11, dry lightning ignited dozens of fires in boreal forests in central and southern Sakha, as well as in neighboring Irkutsk. Initially, these fires appeared as tiny spots of red to the Moderate Resolution Imaging Spectroradiometer (MODIS) sensors on NASA’s Terra and Aqua satellites.

By July 15, plumes of smoke had started to emerge in MODIS imagery. By July 18, thick smoke was billowing from the fires, turning broad swaths of the atmosphere gray and brown as the smoke mixed with clouds arriving from the west. Throughout the following week, multiple streams of smoke swirled over Sakha, shifting course based on the direction of the winds. As of July 29, many fires were still burning vigorously and replenishing the supply of smoke in the atmosphere.

This blend of images from the Cloud-Aerosol Lidar with Orthogonal Polarization (CALIOP) instrument on the CALIPSO satellite and the MODIS on NASA’s Aqua satellite, offers two different views of smoke from the Sakha wildfires on July 18, 2014. The background (top) image was captured by MODIS and provides a true-color view of the fire from directly above. The yellow line indicates the path of the CALIPSO satellite and its laser. CALIPSO sent pulses of laser light (lidar) down through the atmosphere and recorded the reflections to generate a vertical profile of the smoke plume. The MODIS image has been rotated so that it and the line that depicts the CALIPSO flight track are aligned horizontally.

The CALIPSO transect shows a large plume of smoke about 10 to 12 kilometers (6 to 7 miles) up, about the same altitude as the cloud deck on the left side of the MODIS image. CALIPSO also detected a faint mixture of smoke and clouds below the primary smoke plume that was about 3 to 5 kilometers (2 to 3 miles) up. On the far left of the CALIPSO transect, a thin layer of clouds about 3 kilometers up is also visible beneath the overlying cloud deck.

“The lower smoke and the high smoke are both from the same complex of Siberian fires, but the range of altitudes implies a wide range of burning and injection intensities in the days prior to these images,” noted Michael Fromm, a Naval Research Laboratory meteorologist. “These images nicely capture the vastness of the smoke, the intensity of the fires, and evidence that the entire troposphere is polluted by these fires.”

While large wildfires are common in Russia in the summer, the 2014 wildfire season appears to be more intense than usual. According to Russia’s ITAR-TASS news agency, some 12,600 forest fires had burned over 1.8 million hectares (7,000 square miles) as of July 16, 2014. That’s about three times more than last year at that point, according to statistics maintained by Russia’s federal forestry agency. More than 1,000 people have been evacuated from their homes as a result of the fires

For another satellite’s perspective on the smoke from Sakha’s wildfires, see “Tracing Aerosols to their Smoky and Sandy Source.”