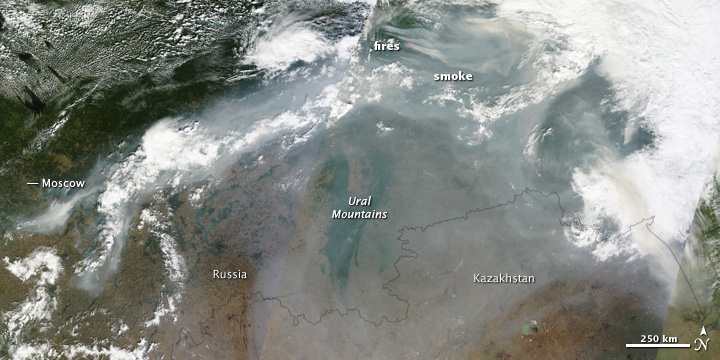 Though a plume of smoke still stretched across hundreds of kilometers, conditions in central Russia appeared to be much better on August 12, 2010. The Moderate Resolution Imaging Spectroradiometer (MODIS) on NASA’s Terra satellite detected two clusters of intense fires when it acquired this photo-like image. The fires are outlined in red.

The first cluster of fires is southeast of Moscow. Though the fires were producing thick smoke when MODIS captured this image, the smoke was blowing away from the city. Moscow appeared to have relatively smoke-free skies compared to previous days.

The second cluster of fires is in the Ural Mountains. The smoke from these fires extends south into Kazakhstan. Apart from the thick plume of smoke that seems to connect the two fire regions, a lighter pall of smoke hangs over southern Russia and northern Kazakhstan.

This image is a composite of three separate satellite images. The diagonal lines mark the seam between each image. The large image is the highest-resolution version of the image, but the image is available in additional resolutions from the MODIS Rapid Response Team.