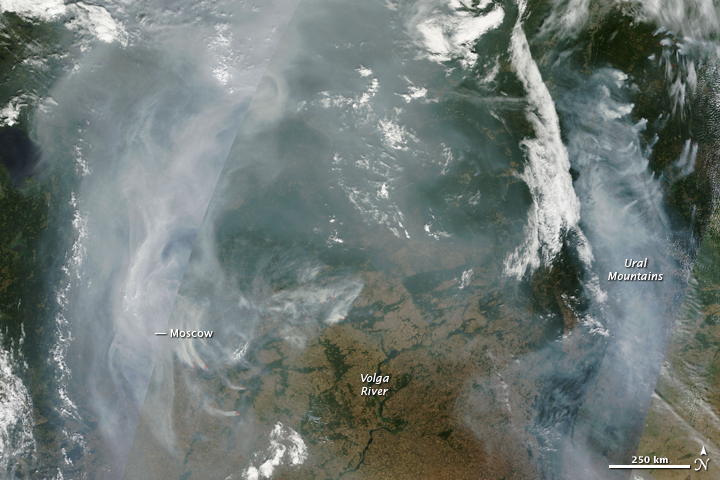 Russia’s wildfires continued to rage on August 9, 2010, producing thick smoke that blanketed much of western Russia. The fire activity and the smoke seemed to be concentrated in two areas, divided by the Volga River. In this true-color image, the most intense fires in the western cluster appear to be south and east of Moscow. Distinct plumes of smoke can be seen rising from several fires immediately southeast of the capital. These fires and others in the region envelop the city in choking smoke, completely obscuring the city from view. Moscow’s approximate location is marked in the image.

East of the Volga River, the fires are concentrated in and near the Ural Mountains. These fires are also visible by the plumes of smoke they are emitting.

On the morning of August 9, 557 wildfires burned in Russia, reported BBC News. Smoke from the fires releases carbon monoxide, fine particles, and ozone-producing chemicals into the atmosphere. Carbon monoxide levels were twice the accepted level in Moscow on August 9, said BBC News.

The Moderate Resolution Imaging Spectroradiometer (MODIS) on NASA’s Terra satellite captured this image on August 9, 2010. The image is a composite of three separate satellite overpasses. A diagonal line marks the boundary between each successive overpass. The large image is the highest-resolution version of the image, but the image is available in additional resolutions from the MODIS Rapid Response Team.