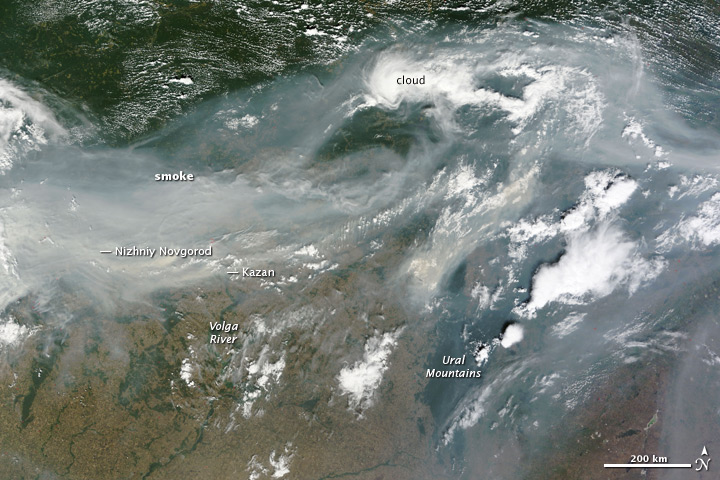 Hundreds of fires burned across western Russia on August 2, 2010, but it is the smoke that conveys the magnitude of the disaster in this true-color image from the Moderate Resolution Imaging Spectroradiometer (MODIS) on NASA’s Terra satellite. Dense gray-brown smoke extends across the width of this image, a distance of about 1,700 kilometers (1,000 miles). The smoke clearly continues both east and west beyond the edge of the image, and is visible in both previous and successive orbits of the Terra satellite. The smoke is so thick that it is not possible to see the ground beneath it.

The fires ignited in late July and early August as record heat combined with drought turned plants tinder dry. Nearly 700 fires burned on August 2, reported CNN, burning homes, killing at least 34 people, and pushing about 500 towns and villages into a state of emergency. The western half of the impacted region is shown in this image. One of the worst hit communities, Nizhny Novgorod, is beneath the dense smoke on the left side of the image. The city’s approximate location is marked.

Many of the fires burned in peat bogs, producing the thick smoke shown in the image. Because of the smoke, the air quality was poor from Moscow (west of the area shown in the image) to east of the Ural Mountains. MODIS detected some of the fires along the edge of the smoke. These fires are outlined in red and visible in the large image. Additional fires in the forests of eastern Siberia pumped dense smoke over eastern Russia.

The large image is the highest-resolution version of the image, but the image is available in additional resolutions from the MODIS Rapid Response Team.

Thick smoke from fires burning in western Russia fills the width of this image, a composite of three separate satellite images acquired on August 3, 2010.