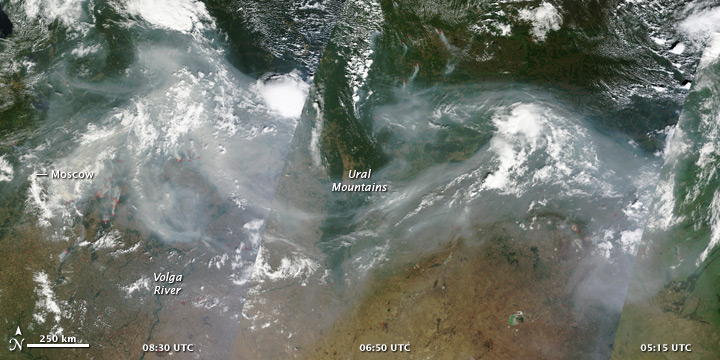 Hundreds of wildfires continued to burn in the bogs and forests of western Russia on August 3, 2010, producing thick smoke that blanketed a broad swath of the country. The smoke fills the width of the image, which shows an area about 3,000 kilometers (1,900 miles) across. If the smoke shown in this image were in the United States, it would stretch from San Francisco to the Midwest, just east of Chicago.

It took three overpasses of NASA’s Terra satellite for the Moderate Resolution Imaging Spectroradiometer (MODIS) to see the full plume from east to west. This image is a composite of the three overpasses. It was 12:30 p.m. (8:30 UTC) in Moscow when the final overpass started. Two time zones away, the first overpass was at 5:15 UTC, 9:15 a.m. Moscow time.

Red squares outline fires that MODIS detected through the smoke. The red squares are difficult to see in the web image, but are clear in the higher-resolution large image. The large image is the most detailed version of the image. The image is available in additional resolutions from the MODIS Rapid Response System.

Thick smoke from fires burning in western Russia fills the width of this image, a composite of three separate satellite images acquired on August 3, 2010.