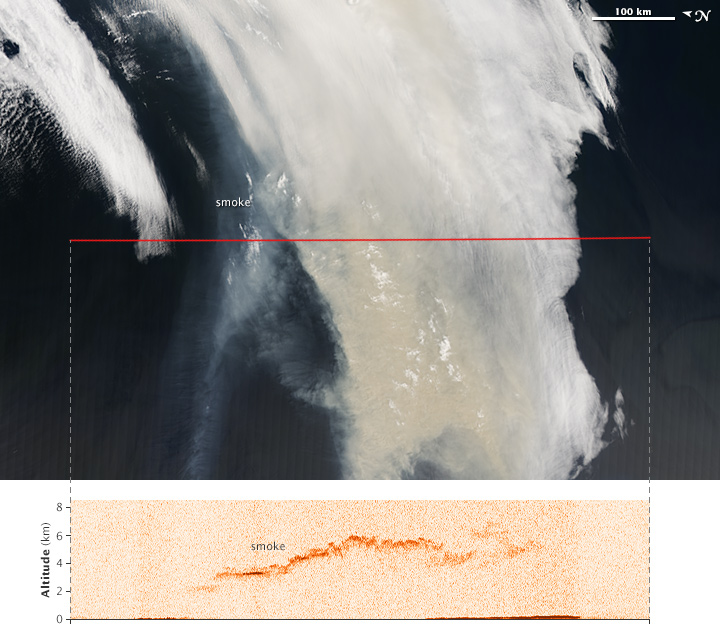 Meteorologists closely monitor smoke plumes from wildfires because smoke can spread across vast distances and pose significant health hazards, particularly to children and the elderly. With numerous wildfires burning in North America in June 2013, there has been plenty to keep smoke-watchers busy.

Understanding how high wildfires send smoke into the atmosphere is key to predicting where and how a plume will spread. Smoke lofted above the boundary layer—the part of the atmosphere closest to the ground, where topography has a significant impact on winds—will spread farther than smoke that remains trapped near the surface.

The images above offer two views of smoke from a large wildfire that was burning in Quebec, Canada, in June 2013. Several satellites observed the smoke plume as it was moving east over Newfoundland toward the Atlantic Ocean.

The background (top) image was captured by the Moderate Resolution Imaging Spectroradiometer (MODIS) on NASA’s Aqua satellite at 1:05 local time (16:05 Universal Time) on June 23, 2013. It shows a true-color view of the smoke plume from above. The image has been rotated so that north is to the left; this is to line the image up with the north-south flight path (marked in red) of the CALIPSO satellite.

The lower image is based on data acquired at 1:14 p.m. local time (16:14 UTC) by the Cloud-Aerosol Lidar with Orthogonal Polarization (CALIOP) instrument on CALIPSO. The instrument sent pulses of laser light (lidar) down through the atmosphere and recorded the reflections to generate a vertical profile of the smoke plume. The sensor detected smoke between about 2 and 6 kilometers (1.2 and 3.7 miles)—high enough that some of it was above the boundary layer. The height of the boundary layer varies, but it generally extends to a maximum of a few kilometers in eastern Canada.

Once the smoke was above the boundary layer, winds transported it east over the Atlantic Ocean. The MODIS instruments on NASA’s Aqua and Terra satellites acquired imagery of the smoke moving across the Atlantic on June 24, and June 25. By June 26, the smoke had reached western Europe. By June 27, it was over the Mediterranean Sea.

Occasionally, wildfires generate enough convection to send smoke plumes out of the troposphere and into the stratosphere, a layer of the atmosphere that generally begins between 8 and 16 kilometers (5 and 9 miles) from the surface. 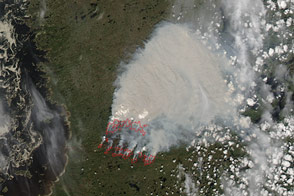 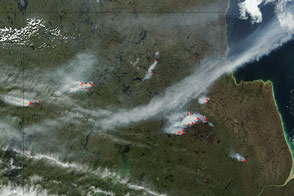 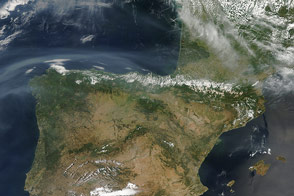