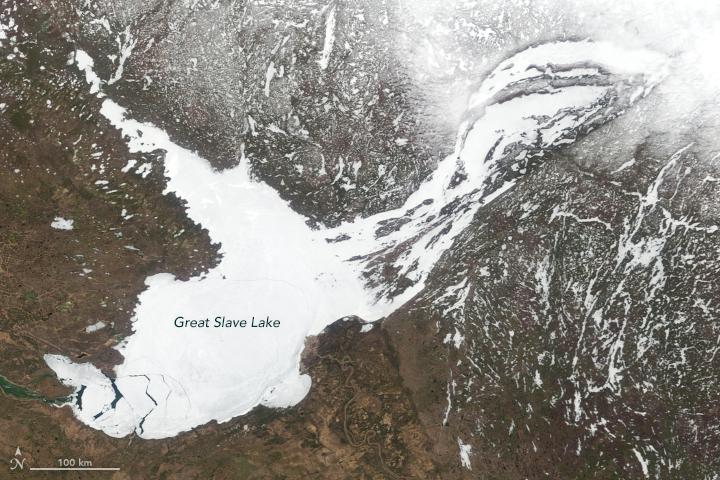 If you are traveling on Canada’s Great Slave Lake, you will notice one characteristic right away: it is enormous. Roughly the size of Belgium, it ranks in the top fifteen largest lakes worldwide. It is the deepest lake in North America, diving about 615 meters (2,020 feet)—almost the same extent as the world’s second tallest building, the Shanghai Tower.

Great Slave Lake is a lifeline to the surrounding shoreline communities—home to more than half of the population of the Northwest Territories, including its capital Yellowknife. Many of these communities depend on the lake for its abundance and plethora of fish, which helps drive the fishing and tourism industry. More than 5,000 anglers visit the area annually to catch fish, which keep near the lake’s surface in the summer.

The image above shows the breadth of Great Slave Lake, still mostly covered in ice on May 16, 2019. The lake stretches about 500 kilometers (300 miles) long and from 50 to 225 kilometers (30 to 140 miles) wide. It is a major source of water for Canada’s longest river, the Mackenzie, which connects at the southwest end of the lake. This image was acquired by the Moderate Resolution Imaging Spectroradiometer (MODIS) on NASA’s Terra satellite.

Getting across or around the lake can be a challenge, but people can travel on an all-season highway on the west side of the lake. In the wintertime, some portions of the lake freeze over with ice thick enough to drive on. Generally, the lake is frozen for eight months—from late November to mid May. 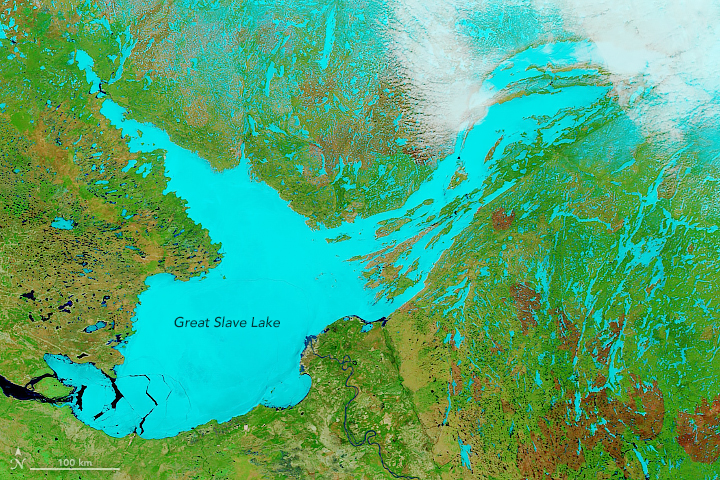 The second image shows the same scene in false color (MODIS bands 7-2-1), which helps differentiate areas of ice (light blue) from water (dark blue). The lake and surrounding areas have thawed a considerable amount since April.

In 2019, ice on the lake melted faster than in previous years. For the first time in 24 years, the Snowking’s Winter Festival had to close its annual Snowcastle on the lake due to a warm temperatures threatening the ice structure. The ice road from Yellowknife to Dettah also closed about a week earlier than in typical years. News outlets report that low water levels in the lake also contributed to the ice breaking up earlier than usual.