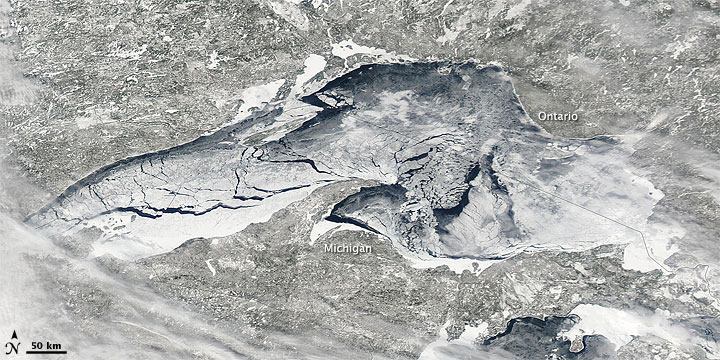 A relatively rare blanket of ice rested on the surface of Lake Superior in early March 2009. The Moderate Resolution Imaging Spectroradiometer (MODIS) on NASA’s Aqua satellite captured this image of the lake and its surroundings on March 3, 2009.

In this true-color, photo-like image, ice floating on the surface of Lake Superior ranges in color from white to pale gray-blue. The ice appears most solid along the southern shore of the western half of the lake. North of that solid band of ice, cracks reveal deep blue lake water. Dark lake water also appears in the eastern part of the lake, especially along its northern shore. As it does in the west, ice cover appears relatively unbroken at the extreme southeast end of the lake.

Although a completely frozen surface of Lake Superior is unusual, ice lingering on the lake in early March has happened before. In early March 2009, the U.S. National Oceanic and Atmospheric Administration’s National Weather Service predicted that thawing would soon set in, barring a return of arctic air to the region.

Around the time MODIS acquired this image, winter released its grip on nearby Lake Huron with disastrous results. Broken by winds and warming temperatures, small mountains of ice migrated into lakefront homes on Saginaw Bay.