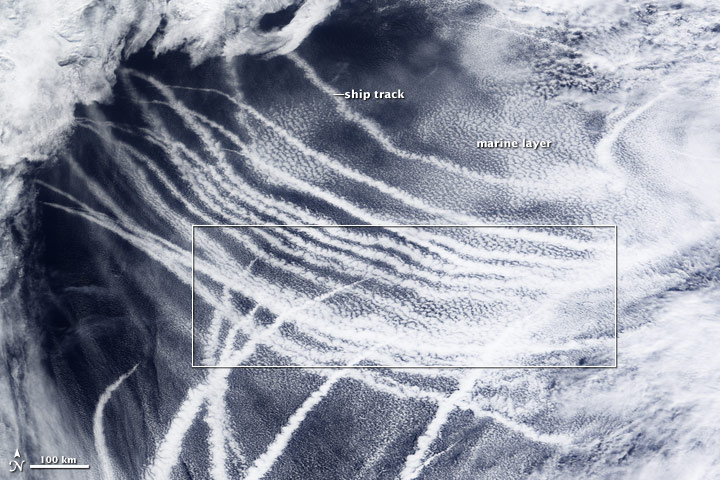 On March 4, 2009, the skies over the northeast Pacific Ocean were streaked with clouds that form around the particles in ship exhaust. This pair of images shows how these ship tracks are different from the natural marine clouds in the same area. The top image is a natural-color (photo-like) view of the ship tracks. The image below reveals more information than a picture: it shows the size of the cloud droplets. Both images are based on observations made by the Moderate Resolution Imaging Spectroradiometer (MODIS) on NASA’s Terra satellite.

Cloud droplets form when water vapor condenses (or nucleates) onto a small particle, like an aerosol particle produced from fossil fuel combustion or a salt crystal from the ocean surface. The more numerous the nucleation â€œseeds,â€ the more numerous the cloud droplets, and the smaller the resulting droplet size because the available condensed water is partitioned among a great number of droplets. The particles produced in ship exhaust are more numerous than the natural aerosols over the ocean. So the clouds that form in the plumes of ships have more, smaller droplets than the background marine clouds.

The two cloud regions (in-track and out-of-track) may actually contain the same volume of water. But a volume of cloud water condensed onto many small droplets has a larger reflective cross sectional area than an equal amount of water condensed into fewer, but larger droplets. (Said another way, as the radius of a sphereâ€”a cloud dropletâ€”gets smaller, surface area decreases more slowly than volume.) Because more light is reflected back to the satellite, the cloud with smaller droplets looks brighter.

Why are scientists concerned with cloud brightness? A cloud’s brightness impacts how much sunlight gets bounced back to space and how much reaches the surface of the Earth, which influences global climate. The size of the droplets also influences the amount of rain the clouds produce; smaller droplets are less likely to collide and form drops that are big enough to fall as rain.

NASA images by Robert Simmon and Jesse Allen, based on an image by Jeff Schmaltz, MODIS Rapid Response Team. Caption by Rebecca Lindsey.