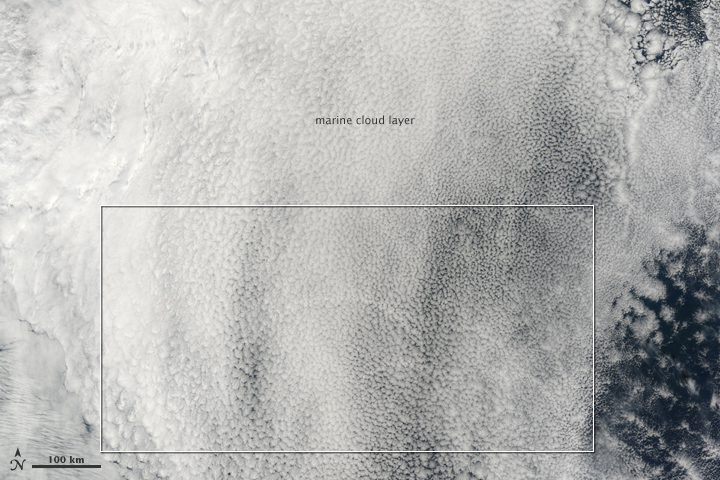 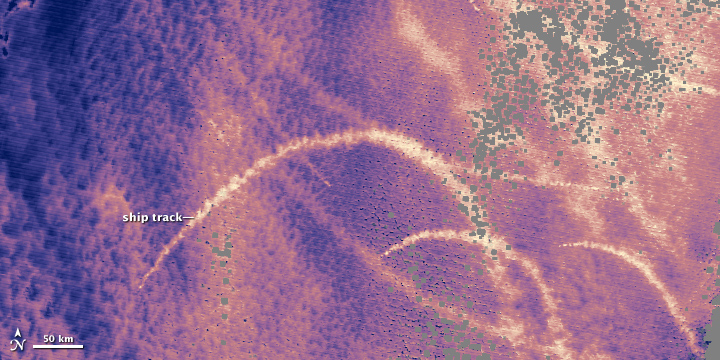 Clouds form when water vapor condenses or freezes onto tiny solid or liquid particles, such as dust, soot, or crystals of sea salt. Over the remote ocean, the air is usually cleaner than it is over land, so there are fewer particles to act as seeds for cloud droplets. The scarcity of particles means that the droplets that do form grow relatively large.

This pair of images demonstrates how air pollution can change the size of droplets in marine clouds. The top image is a photo-like view of the North Pacific Ocean (south of the Aleutian Islands) on September 29, 2009. A blanket of clouds—a little thin in places—spans the scene. The lower image shows the size of cloud droplets within the area outlined in white in the top image. Bigger droplets are darker colors (blue, purple); smaller droplets are brighter (pink, yellow).

The bright yellow arcs that streak the marine cloud layer are ship tracks—clouds that form when water vapor condenses onto the myriad tiny pollution particles in ship exhaust. There are more seed particles in ship exhaust than are found in clean marine air, and the available water vapor gets spread out more thinly among them. Because the available water is spread among more particles, the cloud droplets that form in the ships’ wakes are smaller than typical marine layer cloud droplets.

By increasing the number and decreasing the size of cloud droplets, pollution often makes clouds brighter (more reflective to incoming sunlight), in the same way that a crushed ice cube is more reflective than a solid one. In this image, however, the ship tracks don’t appear significantly brighter than the surrounding cloud layer, perhaps because the cloud layer was already fairly bright. (A March 2009 image from this area demonstrates the cloud-brightening effect more dramatically).

In marine layer clouds, an abundance of small particles may also delay the onset of precipitation, which depends on cloud droplets colliding and coalescing into larger, heavier drops. Said another way, pollution can increase the lifetime of clouds.

Human pollution has likely been modifying clouds on a global scale throughout the modern (industrial) era. In fact, climate scientists suspect that these modifications—increasing cloud brightness and lifetime—have probably helped offset some of the warming influence of rising greenhouse gas concentrations.