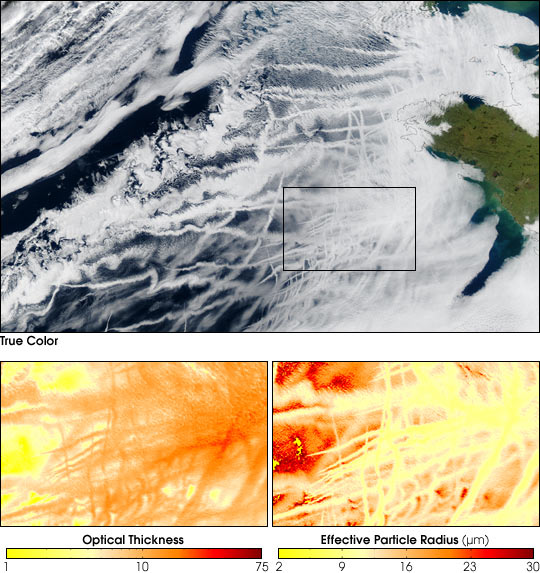 An unusually high number of ship tracks were visible in the clouds off of the coasts of France and Spain in these true- and false-color images from the Moderate Resolution Imaging Spectroradiometer (MODIS) on the Aqua satellite on January 27, 2003. Ship tracks form when very small, airborne particles emitted in the exhaust of large ships (and airplanes) attract water molecules, acting as “seeds” for clouds. These seeds are called cloud condensation nuclei. Continued accumulation of droplets on the cloud condensation nuclei forms the thin, streaky clouds pictured in these images. As the ships moved about the East Atlantic, they left a visible, though impermanent, record of where they have recently been. Generally speaking, the faster the ship, the narrower, longer, and less diffuse the ship track will be. Slower ships will leave shorter, wider, and more diffuse ship tracks. Ship tracks often reflect the direction and speed of the wind as much as the direction and speed of the ship.

The false-color cut-aways show two properties of clouds that influence the heat and energy balance of the atmosphere and, as a result, the climate. One is cloud optical thickness, which describes how much light is able to pass through a cloud. The other characteristic is cloud particle radius, which is the estimated size of the radius of the particles making up the clouds.

These images reveal an important difference between clouds formed from natural cloud condensation nuclei (like dust or sea salt) and those formed from particles in ship exhaust. First, the ship track clouds contain greater amounts of smaller liquid water particles (shown in yellow) than surrounding natural clouds (shown in red). The optical thickness of the ship track clouds is different as well, showing up as dark orange streaks.

Why are these characteristics important? A cloud’s optical thickness determines how much sunlight reaches the Earth’s surface and how much is reflected or absorbed by the clouds, factors that influence global temperatures. The size of cloud particles is important, too. In general, smaller particles produce brighter, more reflective clouds, which bounce light from the sun back into space and cool the planet. If that sounds like a good way to combat global warming, consider this: when particles are small, they are less likely to collide with one another often enough to produce raindrops. Indeed, in some parts of the world, increasing, persistent air pollution appears to be contributing to drought.