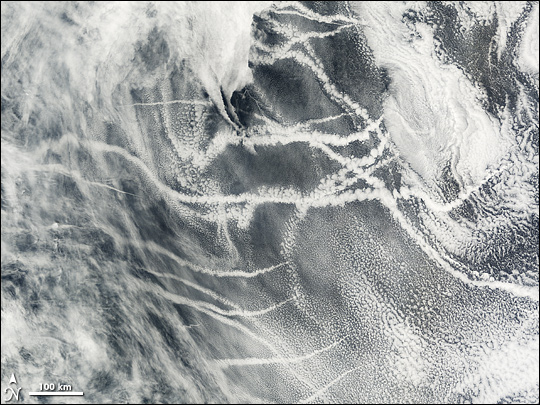 Though they may look like airplane contrails, the streaky clouds shown in this image are ship tracks, bright clouds that form in a ship’s wake. The clouds run horizontally across the image, tracing out a major shipping lane in the North Pacific Ocean. Ship tracks occur when clouds form around the tiny particles that ships release in their exhaust. The particles in exhaust are much smaller than natural cloud seeds like sea salt, so the clouds that form around exhaust particles are made up of liquid water particles that are smaller and more numerous than those found in natural clouds. Because there are more water surfaces to reflect light in a ship track than in a natural cloud, ship tracks are brighter. The bright clouds allow less light and energy to reach Earth’s surface, and this has a cooling effect on Earth. The Moderate Resolution Imaging Spectroradiometer (MODIS) on NASA’s Terra satellite captured this image on July 13, 2008.

You can download a 250-meter-resolution KMZ file of the ship tracks suitable for use with Google Earth.