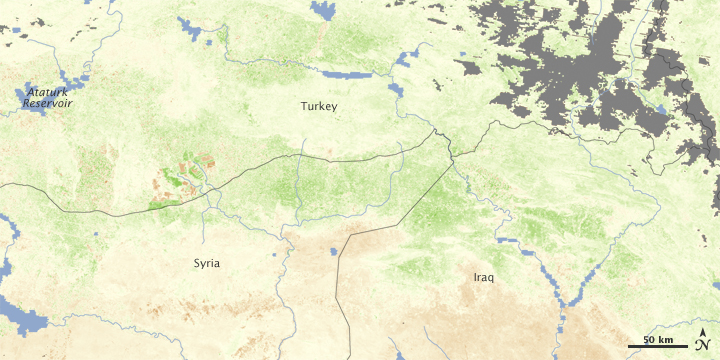 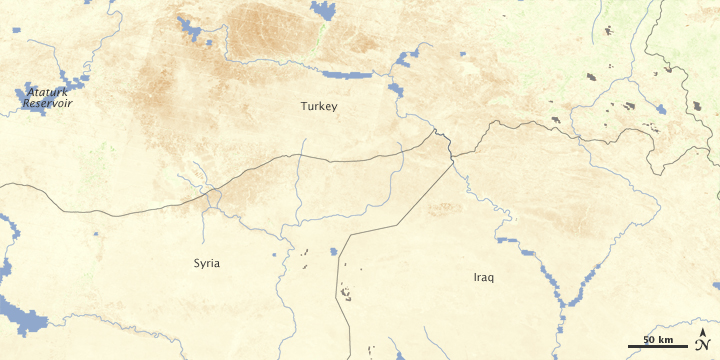 After two years of crippling drought, things were starting to look up in the Middle East. The winter of 2009-2010 brought ample rain and warm temperatures to wheat-growing regions in northern Syria and Iraq and southern Turkey. A bumper crop seemed to be on the horizon. But the conditions that were good for plants were also good for plant diseases, and a severe infection of yellow rust developed.

The top image shows conditions between March 22 and April 6, 2010, compared to the average for the same period in 2000-2009. The lower image shows conditions for May 25 through June 9, 2010, compared to average. Places where plants were growing better or faster than average are green, while areas with less healthy plants are brown. The maps are based on vegetation index data from the Moderate Resolution Imaging Spectroradiometer (MODIS) on NASA’s Terra satellite.

In the top image, crop-growing regions in northern Syria and Iraq and southern Turkey are green. The winter crops were lush and growing quickly, but much of the crop was already infected with yellow rust, a fungus that causes plants to mature early. Their leaves then dry up and turn brown. Warm temperatures throughout the spring also helped plants grow quickly. In this late March image, crops were already at their growing-season peak, which normally doesn't come until late April or early May.

The lower image shows the crops about two months later. At this time of year, crops are usually just past their peak. However, in 2010, the crops that could be salvaged had been harvested, and the rest had turned brown. The vegetation index reflects the change. The anomaly is negative, shown in brown, indicating that plants were less healthy (or gone, in the case of harvested fields) than average for the end of May and early June. Warm spring temperatures helped speed the growing cycle of all plants, including uninfected and non-crop plants, so vegetation conditions were below average across much of the region.

Yellow rust does more than advance the timing of plant growth. As much as 50 percent of an infected wheat crop can be lost, and in severe cases, the entire crop may be lost, said the U.S. Department of Agriculture’s Foreign Agricultural Service. In 2010, Syria anticipated a harvest 35 percent smaller than what it would have been without yellow rust. The impact on Iraq and Turkey is still unclear, reported the Foreign Agricultural Service.

These vegetation maps show the impact of yellow rust, a fungus infection, on plants in Syria, Turkey, and Iraq in the spring of 2010.