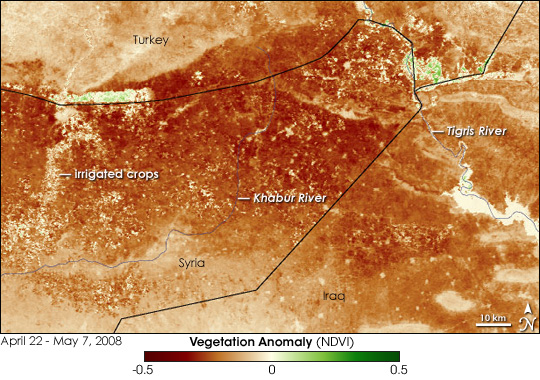 Most of the wheat grown in Syria and much of the grain in Iraq comes from the fertile river valleys in the north. Forming the northern arc of the Fertile Crescent, these regions have sustained human civilization for thousands of years. But in the 2007 and 2008 growing season, crops failed in the wake of one of the worst droughts in the past decade.

This image shows the effect of the drought on vegetation in northeastern Syria and northern Iraq. Made with data collected by the Moderate Resolution Imaging Spectroradiometer (MODIS) on NASA’s Terra satellite, it compares observations of vegetation from April 22 through May 7, 2008, to average conditions observed during the same period from 2000 through 2007. Areas where plants were less healthy and lush are brown, and green areas indicate that plants were growing better than average. Dark brown dominates the image, an indication that drought stunted vegetation throughout the region. Tiny squares of green and light tan are interspersed throughout the region where irrigated crops are growing. The tan circles may be cities or towns.

The image illustrates the contrast between irrigated and rain-fed crops. More than half of the crops grown in this fertile region rely on rain for water. The remaining crops are irrigated. The squares of tan and green indicate that irrigated crops are much closer to normal than the surrounding rain-fed crops. Despite this, even irrigated crops suffered in the drought, since the amount of well and river water available for irrigation was limited. Rain-fed crops and natural vegetation in all non-irrigated regions are clearly much less healthy than average.

The drought, which affected a wide region from Syria to Iraq and Iran, persisted throughout the winter growing season. Little or no rain fell between October and December 2007, when farmers were planting wheat and barley, said the U.S. Department of Agriculture’s Foreign Agricultural Service (FAS). Many crops failed in the dry soil, and in some cases, farmers did not plant at all. In northern Iraq, crops were further damaged in January’s freezing temperatures and rare snow. The rainless winter was followed by a hot, dry spring, which crippled crops further. By May, FAS anticipated that the wheat and barley harvest in Iraq would be 51 percent smaller than in 2007. Wheat and barley account for more than 85 percent of food production in Iraq, said FAS. In Syria, farmers were preparing for a wheat harvest anticipated to be 38 percent smaller than in 2007.

One of the worst droughts in the past decade settled heavily over the Fertile Crescent region of Iraq and Syria in the winter of 2007-2008.