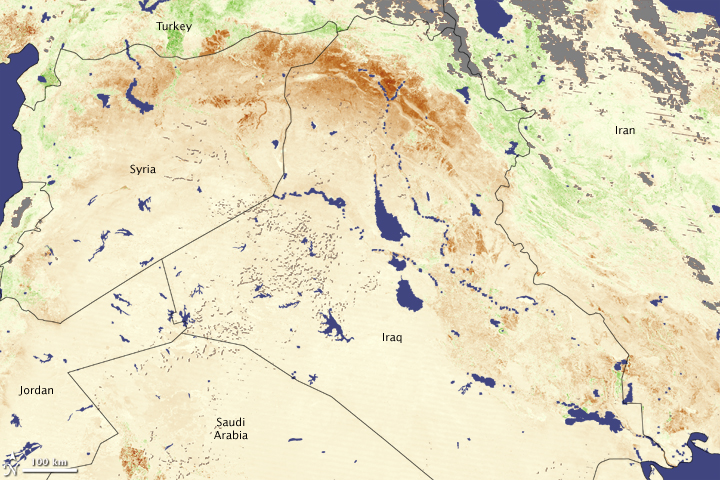 Devastating drought gripped Iraq in the 2007-2008 growing season. The drought continued into 2009, as shown in this image. The image reflects the condition of plants growing throughout the region as observed by the Moderate Resolution Imaging Spectroradiometer (MODIS) on NASA’s Terra satellite between April 7 and April 22, 2009. Areas that are brown show where plants were growing less than they did on average between 2000 and 2008. Green areas show better-than-average growth, and tan areas reflect average conditions.

The brown, drought-affected area stretches in an arc from northern Syria to southern Iran. The most affected area is northern Iraq, the country’s historical breadbasket, where rain-fed wheat is grown, said the U.S. Department of Agriculture’s Foreign Agricultural Service. The winter wheat crop depends on the rain that falls between October and April. Since the crop has little access to other sources of water, the vegetation conditions shown here are a direct response to the lack of rainfall at the end of the critical rainfall period. The Foreign Agricultural Service expected the winter wheat harvest to be well below normal. Winter grain crops account for more than 85 percent of Iraq’s total grain production.

The drought has also limited water supplies available to farmers through the Tigris and Euphrates Rivers, which flow into Iraq from Turkey and Syria. On June 7, 2009, the Iraqi government requested that Turkey release more water from hydroelectric dams on the Euphrates to relieve farmers planting summer irrigated crops, reported Reuters.