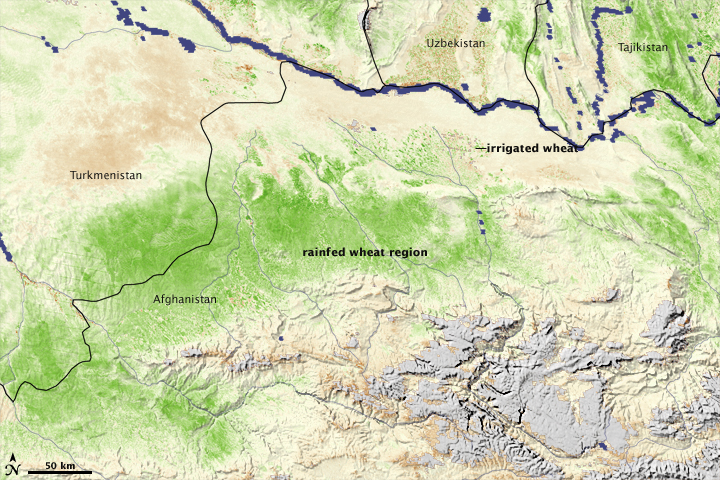 This image shows vegetation conditions in northern Afghanistan from April 23 to May 8, 2009, measured by the Moderate Resolution Imaging Spectroradiometer (MODIS) on NASA’s Terra satellite. Green shows where vegetation growth during that period was above the average for 2000–2008. Reddish-brown indicates below-average growth. Blue indicates water, and gray indicates no data due to snow and/or ice cover—common in the high mountains that dominate the country’s terrain.

Afghanistan’s dry climate and rugged topography restrict its arable land. The country’s most important food crop—wheat—is grown mostly in the northern part of the country, at the foothills of the rugged central mountains. The majority of agricultural land in Afghanistan’s leading wheat-producing region (roughly centered in this image), is rainfed, and 75 percent of the wheat crop depends on rain falling at the right time. In spring 2009, rainfed wheat was more lush than average. Good growing conditions also occurred in Turkmenistan, Uzbekistan, and Tajikistan.

The beneficial rains and resulting bumper wheat harvest were expected to increase Afghanistan’s food security, according to the United Nations Office for Coordination of Humanitarian Affairs. The beneficial rains did have a downside, however. The number of Afghanistan households affected by flash floods in spring 2009 increased. Some of this flooding, however, resulted from rapid snowmelt rather than rain.

In Afghanistan, non-irrigated wheat accounts for a larger percentage of agricultural land, but irrigated wheat accounts for a larger share of total production. According to the Foreign Agricultural Service, a bumper crop usually results from increased yield in rainfed growing areas, rather than irrigated growing areas. That doesn’t mean that irrigated areas are not sensitive to the weather. Like it does in the American West, water for irrigation in Afghanistan comes from the spring and summer melting of the mountain snow pack. Low winter snowfall or rapid spring melt can reduce the availability of water for irrigated crops.

The GEOGLAM Crop Monitor for Early Warning provides science-driven alerts for countries that may be in danger of low crop yields.