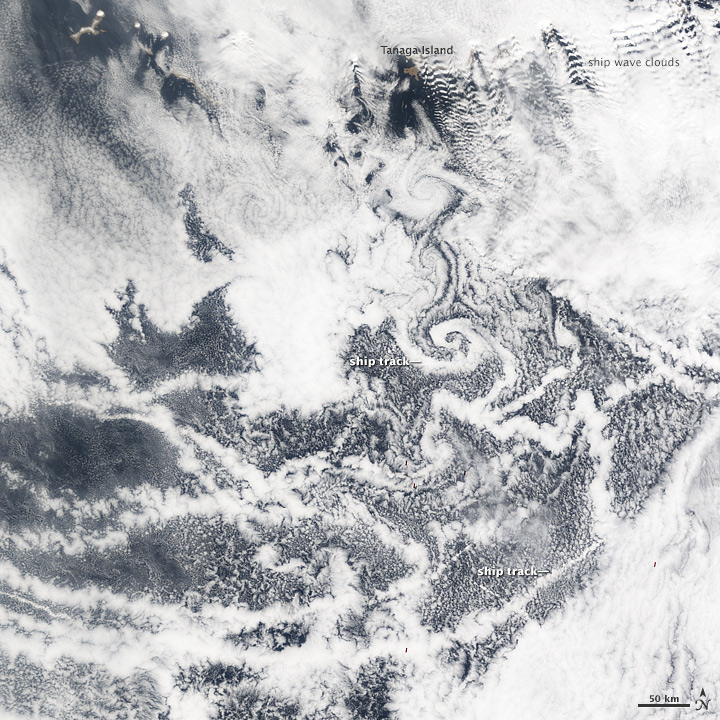 When ships and islands interact, it’s usually because ships are docking or departing with passengers or cargo. But ships and islands interacted in a different way in the northern Pacific Ocean in April 2013. The result looked like marbled paper. Clouds that formed around ship exhaust (ship tracks) mingled with cloud vortices that had formed off of the Aleutian Islands.

The relative brightness of ship tracks results from the way they are formed. Cloud droplets form as tiny spheres of water around airborne particles, or aerosols. The particles may be natural—such as desert dust or sea salt—or artificial—such as the particles from ship exhaust. Compared to natural aerosols, ship exhaust particles are smaller and more concentrated within a given area, seeding smaller, more numerous cloud droplets. The spheres of water in clouds all reflect sunlight, but some reflect light better than others. Compared to a big sphere, a small sphere has a greater surface-to-volume ratio, and the greater surface area makes for a better reflector. So water droplets in ship-track clouds reflect more light than cloud droplets seeded by natural particles.

Although the ship tracks over the Pacific Ocean in late April 2013 mostly ran east-west, some took on swirling shapes, perhaps caught up in the cloud vortices off the Aleutian Islands. When a moving air mass encounters an obstacle such as a volcanic island, the wind flow is disrupted. Downstream from the obstacle, von Karman vortices sometimes form. These double-row vortices alternate the direction and rotation of air. Clouds make the vortices visible, and the results are beautiful paisley patterns. A line of vortices can be seen stretching southward from Tanaga Island.

Yet another distinct cloud formation is visible in the image above: ship wave clouds. Just as vortices can result from an obstruction to air flow, air that rises and falls can create atmospheric wave patterns. Clouds near the wave tops are brighter than clouds near the wave bottoms. These clouds are named for the waves formed in the wakes of boats.