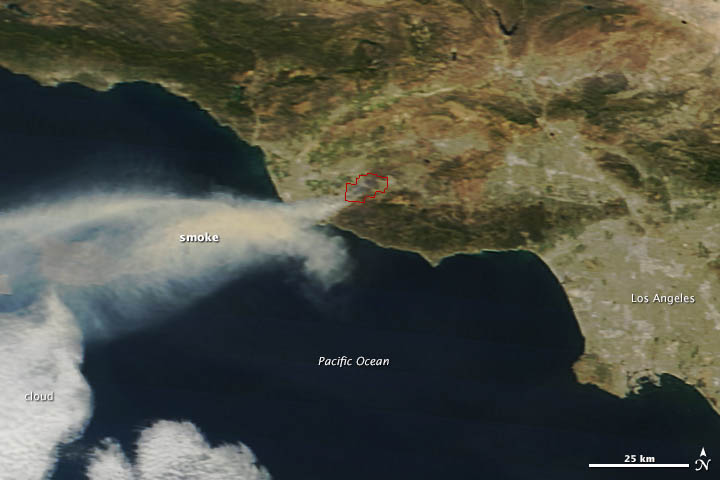 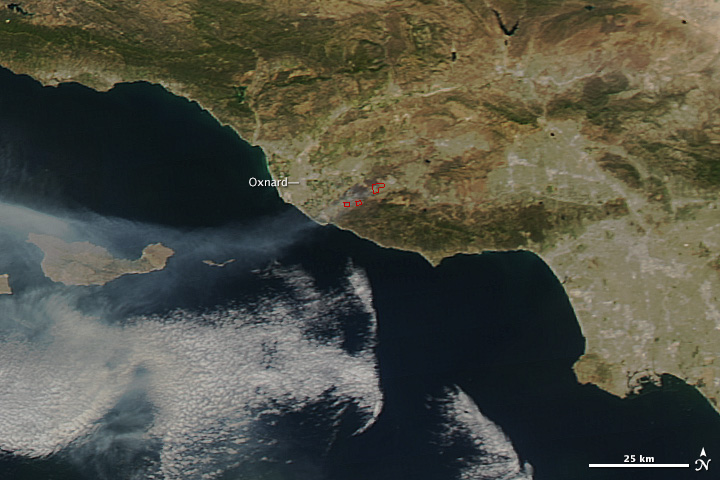 Fueled by hot, dry Santa Ana winds, several wildfires started in southern California in early May 2013. The National Interagency Fire Center (PDF download) has predicted that fire season in California could be earlier than normal due to scarce winter and spring precipitation.

On May 2, 2013, a fire started near Camarillo Springs and gusty winds blew it toward the coast, wafting smoke out over the Pacific Ocean. The same day, the Moderate Resolution Imaging Spectroradiometer (MODIS) on NASA’s Terra and Aqua satellites captured these images of the fire burning about 50 miles northwest of Los Angeles, California. The Terra image (top) was collected at 11:15 a.m. Pacific Daylight Time, and the Aqua image (lower) was collected at 2:30 p.m. PDT. Red outlines indicate hot spots where MODIS detected unusually warm surface temperatures that are associated with fires.

According to firefighting agencies in California, the Springs fire had spread over 10,000 acres by 6:30 a.m. on May 3. More than 30 homes and other buildings had been damaged by fire, and another 4,300 were threatened. The fire was being fought by more than 900 firefighters on the ground and 14 water-dropping helicopters and planes, and it was 10 percent contained by the morning of May 3.

Meteorologist Jeff Masters of the Weather Underground noted that “an unusually sharp ridge of high pressure has set up, bringing record high temperatures, a strong Santa Ana wind event, and dangerous fire weather.” Temperatures in Southern California were above 90°Fahrenheit in many places, with humidity as low as 5 percent. Winds gusted from 40 to 75 miles per hour. Masters noted that a low pressure system was expected to bring onshore winds and cooler temperatures over the weekend.