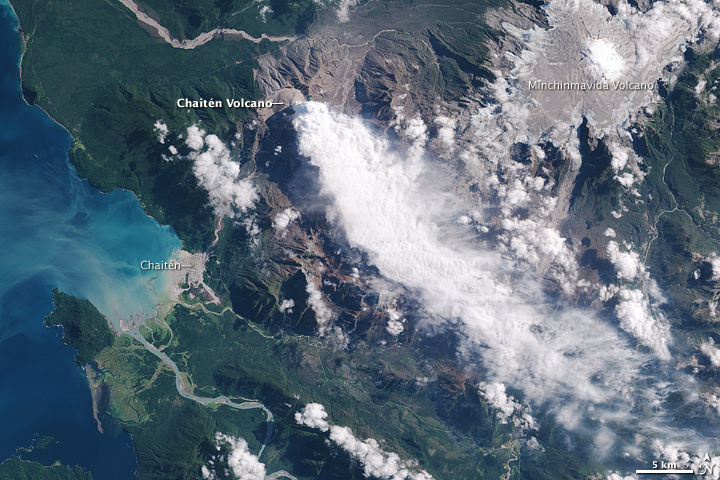 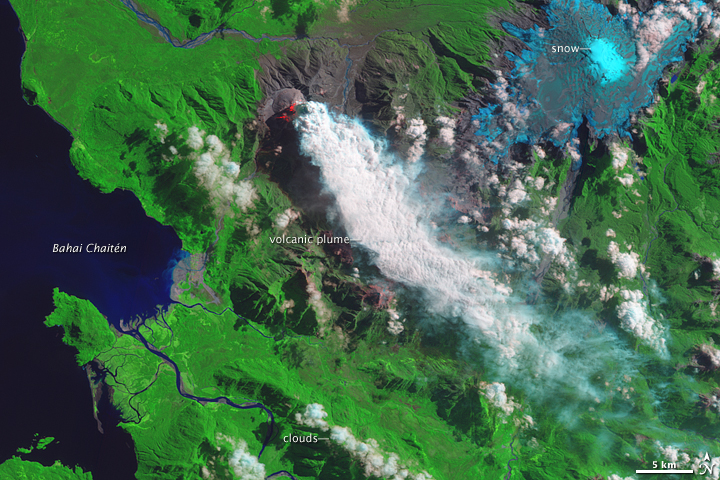 Perhaps one of nature’s greatest displays of power is an erupting volcano. Towering clouds of ash and steam, intense heat, fast-moving landslides, and flowing lava are a just a few of the many life-threatening hazards of a volcanic eruption. The power and danger are at once frightening and fascinating. Satellites provide a detailed and comprehensive view of an eruption from the safety of hundreds of kilometers away. These images, from the Advanced Land Imager on the EO-1 satellite, show the ongoing eruption of Chile’s Chaitén Volcano.

The top image shows the volcano and its surroundings in photo-like true color. The Chaitén Volcano is a relatively small, tan mound near the top of the image. A white plume, likely composed of steam and possibly ash, rises from the volcano. Gray-tan ash blankets the snow on the peak of the neighboring Minchinmávida Volcano and the land between the two peaks.

The lower image includes both infrared and visible light. Chaitén’s peak glows red from the heat of the eruption. The snow beneath the ash on Minchinmávida is bright blue. Plant-covered land is green, and cooler clouds have a slight blue tint.

The EO-1 satellite captured these images on March 6, 2009. Chaitén began to erupt unexpectedly on May 2, 2008, after some nine thousand years of quiet. The eruption forced the evacuation of the nearby town of Chaitén and covered hundreds of kilometers of farmland in ash. Though the volcano continued to emit clouds of ash, a few of Chaitén’s citizens had returned in early 2009 when the volcano erupted again on February 19. According to the Smithsonian Global Volcanism Program, part of the lava dome collapsed, causing lateral explosions, block-and-ash flows, and pyroclastic flows (a fast-moving avalanche of hot ash, volcanic rocks, and gas). One flow came within five kilometers of the town. The volcano was clearly still active two weeks later when EO-1 observed it.