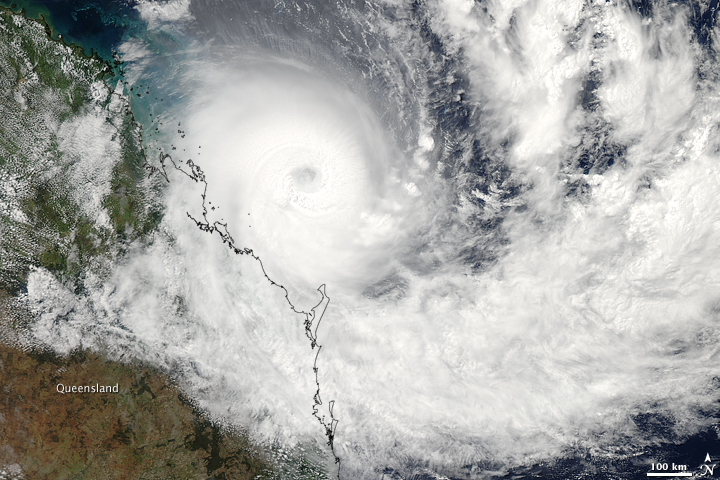 With winds near 130 knots (150 miles per hour), Tropical Cyclone Hamish was a powerful Category 4 storm (on the Saffir-Simpson Scale) as it paralleled the northeast coast of Australia at the end of the first week of March 2009. Initial predictions were that the storm would weaken and come ashore just north of Brisbane on March 9, but instead, the storm veered more east than south, drawing the eye of the still-powerful storm away from land.

This image of Hamish was captured by the Moderate Resolution Imaging Spectroradiometer (MODIS) on NASA’s Aqua satellite on March 9, 2009 at 3:30 Universal Time Coordinated. The storm was compact, with a ring of towering thunderclouds surrounding the cloud-filled eye. A few hours before this image was taken, Hamish had maximum sustained winds near 110 knots (127 mph), with gusts up to 135 knots (155 mph). Northwest of the storm, the waters around the Great Barrier Reef were bright turquoise, a sign that winds and waves had churned up sediment.

Although the risk of a direct landfall had lessened, the dangers from strong winds and flooding from heavy rainfall and storm surges remained. Thousands of residents of low-lying coastal communities north of Brisbane evacuated their homes, and forecasters warned that the storm’s path and intensity would remain uncertain until Wednesday.

Powerful Tropical Cyclone Hamish formed in the Coral Sea off northeast Australia on March 5, 2009, and intensified into a strong Category 4 storm as it moved southeast along the Queensland coast.

Powerful Tropical Cyclone Hamish formed in the Coral Sea off northeast Australia on March 5, 2009, and intensified into a strong Category 4 storm as it moved southeast along the Queensland coast.