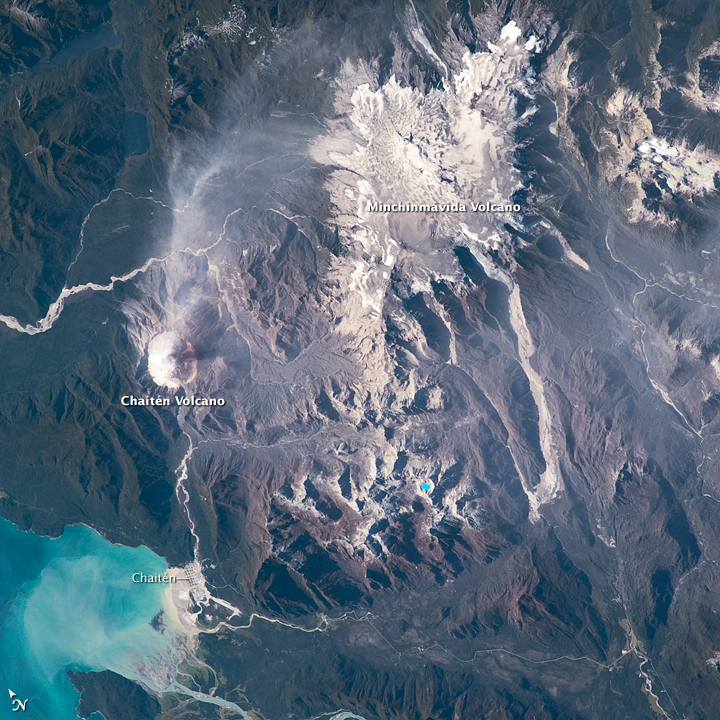 The Andes Mountains along the western coastline of South America include numerous active stratovolcanoes (steep-sided, cone-shaped volcanoes). The majority of these volcanoes were formed and are still fed by magma generated as the Nazca tectonic plate under the southeastern Pacific Ocean moves northeastward and plunges beneath the South American continental plate—a process known as subduction. The line of Andean volcanoes marks the approximate location of the subduction zone.

This astronaut photograph highlights two volcanoes located near the southern boundary of the Nazca–South America subduction zone in southern Chile. Dominating the scene is the massive Minchinmávida Volcano (image upper right). Charles Darwin observed an eruption of this glaciated volcano during his Galapagos Islands voyage in 1834; the last recorded eruption took place the following year. When this photo was taken, the white, snow-covered summit of Minchinmávida was blanketed by gray ash erupted from its much smaller but now-active neighbor to the west, Chaitén Volcano.

Chaitén Volcano is dominated by a large lava dome within a caldera (an emptied and collapsed magma chamber beneath a volcano). With no recorded history of eruptions, Chaitén roared back to life unexpectedly on May 2, 2008, generating dense ash plumes and forcing the evacuation of the nearby town of Chaitén. Volcanic activity continued at Chaitén in early 2009; several days before this astronaut photograph was taken, a new lava dome partially collapsed and generated a pyroclastic flow (a scalding avalanche of gas, ash, and rock debris). A steam and ash plume extended northeast from the eruptive center of the volcano at the time of this image.

Astronaut photograph ISS018-E-35716 was acquired on February 24, 2009, with a Nikon D2Xs digital camera fitted with a 180 mm lens, and is provided by the ISS Crew Earth Observations experiment and the Image Science & Analysis Laboratory, Johnson Space Center. The image was taken by the Expedition 18 crew. The image in this article has been cropped and enhanced to improve contrast. Lens artifacts have been removed. The International Space Station Program supports the laboratory to help astronauts take pictures of Earth that will be of the greatest value to scientists and the public, and to make those images freely available on the Internet. Additional images taken by astronauts and cosmonauts can be viewed at the NASA/JSC Gateway to Astronaut Photography of Earth. Caption William L. Stefanov, NASA-JSC.

Months after its violent eruption in May 2008, Chile’s Chaitén Volcano remained active, and continued to send lahars—avalanches of volcanic ash, water, and mud—into the town of the same name.