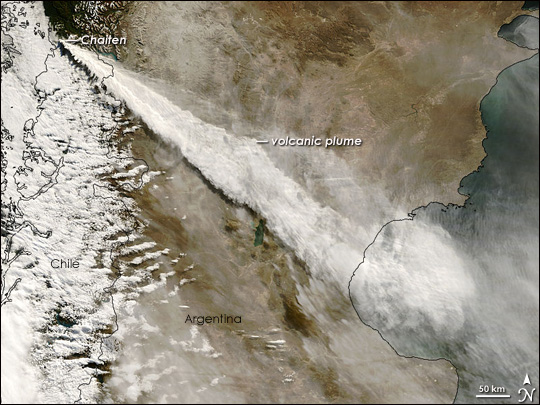 After more than 9,000 years of silence, Chaitén Volcano in southern Chile erupted on May 2, 2008. The plume of ash and steam rose 10.7 to 16.8 kilometers (35,000 to 55,000 feet) into the atmosphere, reported the Smithsonian’s Global Volcanism Program. According to news reports issued by the AFP news service, ash blanketed the town of Chaitén, 10 kilometers away, forcing the town’s 4,000 people to evacuate by boat.

On May 3, ash and steam continued to billow from the volcano. The Moderate Resolution Imaging Spectroradiometer (MODIS) on NASA’s Terra satellite captured this photo-like image of a long, cloud-like plume flowing southeast from the volcano’s summit on May 3 at 10:35 a.m. local time (14:35 UTC). The plume rises high over the Andes Mountains, drifts across Argentina, and dissipates over the Atlantic Ocean. Ash closed schools, roads, and an airport in Argentina, hundreds of kilometers away from the volcano, said AFP.

Radiocarbon dating of the last lava flow from Chaitén Volcano suggests that the volcano last erupted in 7420 BC, plus or minus 75 years, says the Global Volcanism Program. The volcano has a history of explosive eruptions with pyroclastic flows associated with dome collapse. During an eruption, some volcanoes build a dome of lava. Eventually, hot blocks of lava break away from the dome, triggering a fast-moving avalanche of hot volcanic ash, gas, and lava, called a pyroclastic flow. As of May 5, ash continued to rise from the volcano, but no pyroclastic flows had been reported.