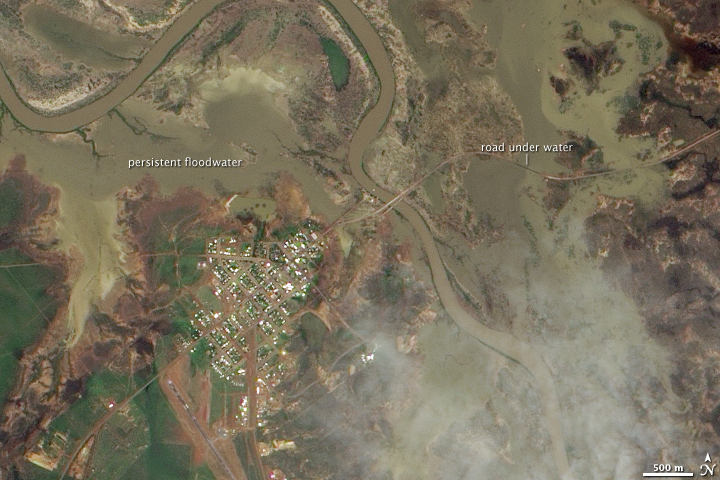 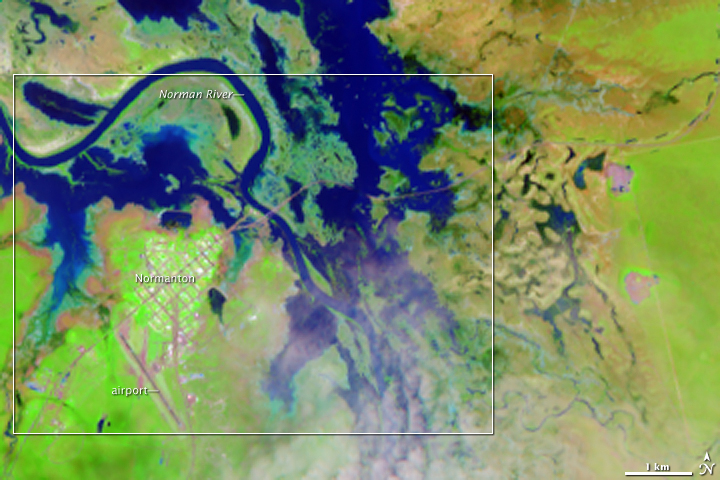 After two months of being cut off by flood waters, the small northern Australian city of Normanton finally regained a land connection to the rest of Australia when some of the roads into town officially re-opened on March 12, 2009, said a local news report. These images, captured by the Advanced Land Imager (ALI) on NASA’s Earth Observing-1 (EO-1) satellite, reveal that despite the re-opening of roads, floods still surrounded much of the Queensland town on the morning of March 12.

Light cloud partially blocks the view of the floods, but skies over Normanton were clear. The town’s roads form a neat brown grid near the center of the top, natural-color image. Buildings are bright white dots, arranged within the square blocks of the town. A long, straight airport runway borders the town to the southwest. For weeks, this airport and boats provided the only access to the town. As this image shows, even on March 12, some roads leading into town were still flooded. Roads cut across the landscape in distinctive lines. Around the town, to the north, east, and west, murky floodwater blurs the landscape, covering the roads in places.

The lower image shows a wider version of the scene in false color. The image combines infrared and visible light, which makes water features far more obvious than they are in the natural-color image. (The extent of the natural color image is outlined in white.) Water is dark blue, while plant-covered land is green, and bare earth is rosy tan. The Norman River cuts a distinct channel north and east of Normanton. Elsewhere, the blue water is largely floodwater. In this view, it is much more obvious where water cuts across roads leading into town from the east and the west.

Even though extensive flooding was visible on March 12, the floods had receded significantly. On February 19, when Taiwan’s Formosat-2 satellite captured a similar view of Normanton, the floods closed in on the town. The floods were the worst in 35 years, and the second-worst on record, reported the Australian Broadcasting Corporation. A wide view of the floods on February 18 reveals extensive flooding on all of the rivers in the Flinders River system.