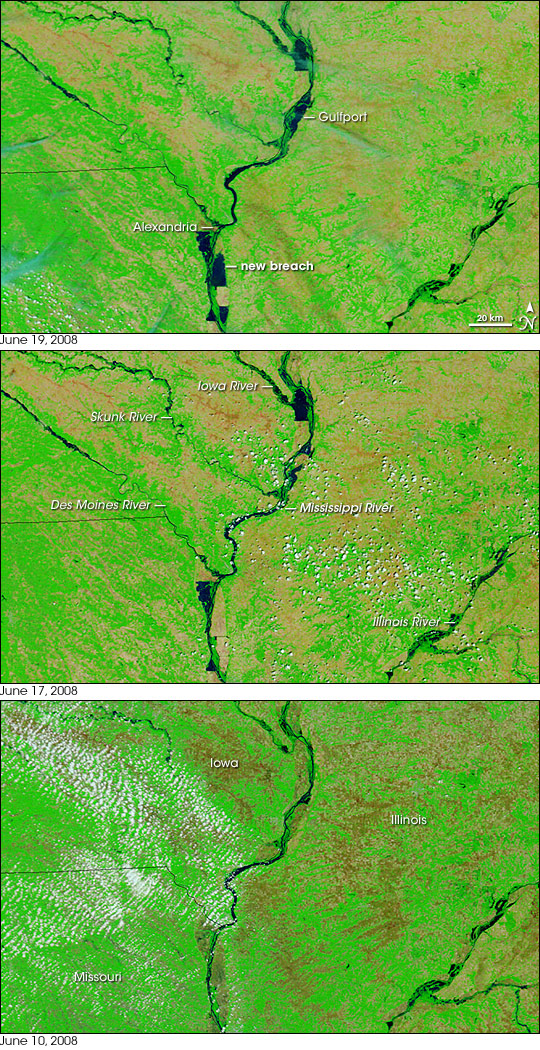 This trio of images shows just how quickly floods rose on the Mississippi River in mid-June 2008. The Moderate Resolution Imaging Spectroradiometer (MODIS) on NASA's Terra satellite captured the top false-color image on June 19, 2008. The center image was taken just two days earlier on June 17, and the lower image is from June 10.

In the short span of nine days, the river rose from its normal level to major floods that burst through several levees. On June 17, some of the levee breaches were evident in the dark pools of water that surrounded the confluence of the Iowa and Mississippi Rivers and spanned the northeast corner of Missouri. By June 19, the flood area expanded to include several new areas. The river spread across parts of Indiana and Missouri near the city of Alexandria, Missouri. A burst levee allowed water to flood the town of Gulfport, Illinois. The floods were beginning on June 17, but had expanded significantly by June 19. Additional flooding is visible in the large images, which cover a wider area.

This type of false-color satellite image is particularly useful for monitoring floods because it increases the contrast between land and water, which is often muddy brown in photo-like, natural-color images. The images combine infrared and visible light so that water is black or dark blue. Bare earth or lightly vegetated land is tan-pink, and plant-covered land is bright green. Clouds are pale blue and white. Daily images of the Midwestern United States are available in both natural and false color from the MODIS Rapid Response System.