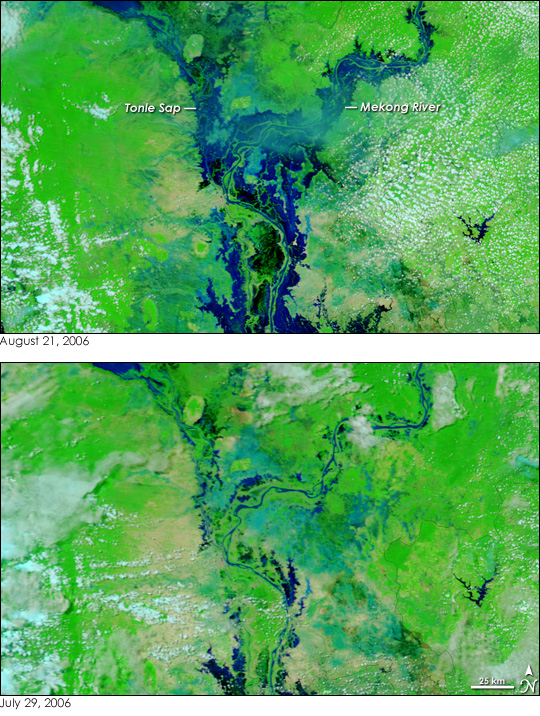 Heavy rains starting on August 14, 2006, caused these impressive floods along the Mekong River and the Tonle Sap in Cambodia. The Moderate Resolution Imaging Spectroradiometer (MODIS) on NASA’s Terra satellite captured the top image on August 21, and the lower image on July 29, 2006. In the few weeks that passed between the two images, water has transformed the region. Both rivers have gone from their dry-season lows to their monsoon-season flood state. Water, ranging from black, clear water to pale blue, muddy water, stretches over more than fifty kilometers of previously dry land. Though the Mekong and the Tonle Sap both flood every year, the floods shown here are among the worst in recent memory, says the Dartmouth Flood Observatory.

These images are shown in false color to highlight the presence of water on the ground. In this color combination, water ranges from black to pale blue, clouds are light blue and white, plant-covered land is bright green, and land that is sparsely vegetated is tan. Daily images of Southeast Asia are available from the MODIS Rapid Response Team in both false color and photo-like true color.

Heavy rains pushed the Mekong River and the Tonle Sap to their seasonal highs in August and September 2006.